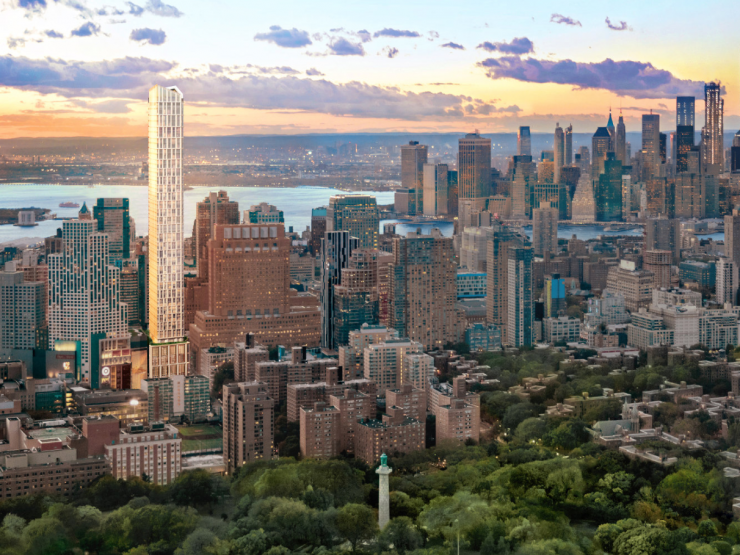 The Brooklyn skyline has welcomed its crown jewel this week. The 720-foot BrooklynPoint tower, which is now officially the tallest building in the borough, has topped out at 138 Willoughby St. The glossy 68-story project is spearheaded by Extell Development and will offer 485 luxury condos in the heart of City Point, Downtown Brooklyn’s largest shopping, dining and entertainment destination.

Brooklyn Point will feature studios to three-bedroom apartments and a plethora of luxury amenities. Closings are scheduled to begin in early 2020, with prices starting at $850,000 for a studio and going up to $3.5 million for a three-bedroom, as reported by Curbed. However, with a steep price point come various luxury amenities, the highlight being the highest residential infinity pool in the Western Hemisphere, which will offer residents breathtaking views of the Manhattan skyline.

Brooklyn Point will feature an indoor saltwater swimming pool, a 35-foot rock climbing wall, a health and wellness facility, yoga studio, a landscaped rooftop retreat with a sundeck, a squash and basketball court, and much more. The project is a mixed-use one, so Brooklyn Point will also incorporate commercial spaces such as coworking and flexible office space.

The glass-clad tower offers convenient access to everything City Point has to offer, including movie theaters, food markets, plenty of shopping destinations—and it’s also close to 11 subway lines. Brooklyn Point was designed by Kohn Pedersen Fox, while the interiors were designed by Katherine Newman of AD100. All the apartments will boast a sophisticated design aesthetic that best represents the spirit of Brooklyn: ‘At Brooklyn Point, we wanted to honor the creative spirit of Brooklyn, while crafting a new landmark for the borough’s downtown,’ KPF Design PrincipalRob Whitlock said in a statement. ‘To that end, we picked up on the diversity of scale and texture of the site’s context in the building’s expression. Brooklyn Point features a sculptural façade, with an eclectic materiality that plays with light and shadow, giving the tower an elegant solidity.

The project, which benefits from a 25-year tax abatement, is scheduled for delivery in 2020. It will hold onto the title of Brooklyn’s tallest building until the completion of the 1,066-foot 9 DeKalb in 2021, according to Bklyner.