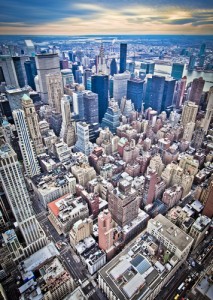 Commercial rezoning of Midtown East in Manhattan marks yet another change to the always-evolving New York City real estate market. Mayor Michael Bloomberg’s plans may be controversial, but the end result, after the debating is over and the real action begins, will be an expansion of NYC office space and other commercially zoned sites. It is an exciting opportunity for those doing business in this world-renowned business district, as well as those hoping to take their commercial enterprise to the next level of success by moving to a Midtown location.

“Reaching for the sky.” That is one of the central components of the Midtown East commercial rezoning plan. As explained by New York City’s Urban Land Institute (ULI), the primary goal of the rezoning plan is to modernize the area around Grand Central Station, expanding the commercial space by creating more Class A NYC office space. The purpose is to ensure that Manhattan stays competitive on a global scale, not losing ground to other business centers springing up throughout the world, particularly in the powerhouse developing nations of India and China.

In New York City, that sort of space expansion means reaching for the sky, building upwards. The proposed rezoning plan would allow for more skyscrapers to be built in the blocks surrounding Grand Central Station. The Municipal Art Society of New York is referring to the plan as up-zoning, as there could be as many as a dozen new towers added to the Midtown East skyline. Those surrounding Grand Central Station would reach as high as 700 to 800 feet into the air. Sites seeking such upward expansion must meet certain criteria, according to the rezoning plan, such as having a minimum of at least 25,000 square feet to serve as a base. Just one project, located on a block bordered by 42nd and 43rd streets, is expected to provide 1.55 million square feet of space.

In addition to increasing NYC office space availability, the rezoning plan seeks to improve accessibility to the expansion of commercial space. A portion of the money that is spent by businesses to pay for air space will be used make ground-level improvements, such as widening sidewalks and designing better pedestrian spaces, as well as making mass transit improvements to manage the greater influx of people. The changes are expected to increase foot traffic in many of the more commercial Midtown East neighborhoods, like Hell’s Kitchen, Herald Square and the Diamond District, benefiting established businesses and attracting new businesses and people.

The Heartbeat of Commerce

The details of the buildings that will result from the rezoning are coming together quickly, and once the final construction approvals come down from officials, things will progress quickly in Midtown East. Keeping a finger on the pulse, a constant measure on the heartbeat of commerce opportunities in the area is key to being able to take advantage of this dramatic expansion of NYC office space. This is among the most active commerce regions in the world, and as quick as the space becomes available, it will be snapped up. Savvy commercial tenants will start establishing relationships with  New York City commercial real estate brokers right away to ensure access to the best sites and prices.

Because like everything in New York, when it starts moving, it’s going to move fast.