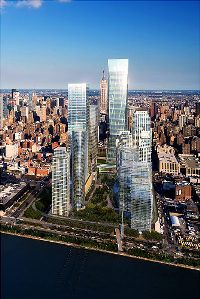 First, there was SoHo. Then followed Chelsea and the Lower East Side. Aspiring artists have always had a home throughout Manhattan, and now it seems the emerging Hudson Square neighborhood is being positioned as an art gallery district.

Development projects in Hudson Square may eventually earn the neighborhood the nickname “Chelsea North.” This neighborhood covers the area west of Eighth Avenue from 28th Street to 43rd Street. For years it has boasted parking lots, low-rise buildings and parking garages, but recent developments such as Hudson Yards aim to deliver an influx of enormous commercial office buildings and residential structures scheduled for completion by 2020. Additionally, the No. 7 subway line will be extended to 34th Street and Eleventh Avenue in 2014, and an extension of the High Line to 34th Street is planned for 2014. Hudson Yards is undergoing the biggest redevelopment of any Manhattan neighborhood.

In Chelsea, immediately to the south of Hudson Yards, gallery space has become scarce and rents have increased greatly. West Chelsea ground floor rents now exceed $100 per square foot. Hudson Yards is one of the few neighborhoods offering a substantial inventory of large warehouse spaces that are perfect for art galleries. Affordable asking rents and an available inventory of space could lead to a migration of art galleries to Hudson Yards. Hudson Yards commercial rents are about half as much as they are in Chelsea.

Already there are examples of galleries leaving Chelsea and relocating to Hudson Yards. Recently, Sean Kelly Art gallery, a dealer in contemporary art, acquired a 22,000 square foot ground-floor and basement space in a building on 10th Avenue and 36th Street.  The gallery started out in SoHo, moved to Chelsea and leased a Hudson Yards gallery that is triple the size of their Chelsea space.

Art galleries are often attracted by new, undefined areas – neighborhoods that are off the radar and still working to establish a strong identity. Hudson Square is Manhattan’s best example. It still has a Wild West-like feel, with huge billboards and truck traffic. But like Chelsea, SoHo, and the Lower East Side before it, this neighborhood is changing.

Proximity to Hotels, Restaurants, and Transportation

In addition to an abundance of warehouse spaces and an eclectic feel, Hudson Yards also enjoys better access to public transportation than Chelsea. It is also within walking distance of numerous hotels and restaurants and features a cultural hub the Baryshnikov Arts Center on 37th Street between Ninth and Tenth avenues. According to the city’s Hudson Square development plan, a visual arts performance space will be built on 30th Street.

For further information regarding commercial space for your gallery in Hudson Yards, Chelsea or any other Manhattan neighborhood, call Metro Manhattan Office Space Principal Broker Alan Rosinsky at 212-444-2241.