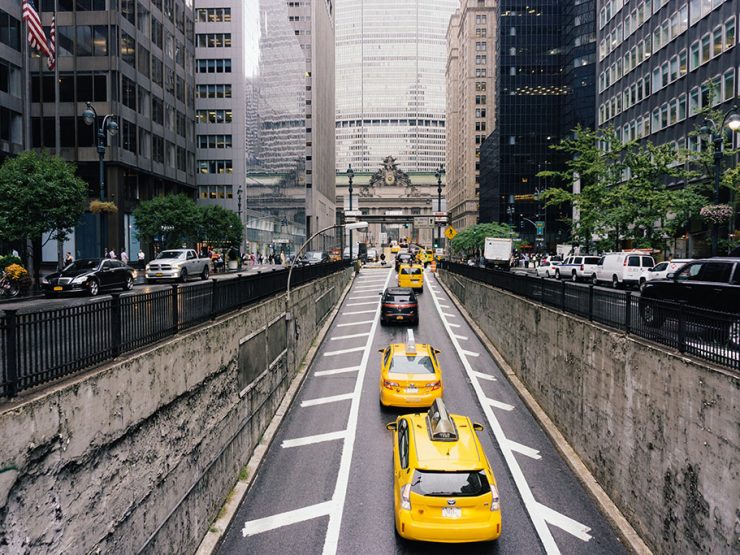 On November 15th 2021, President Biden signed into law the “Infrastructure Investment and Jobs Act.” This bipartisan legislation will distribute $1.2 trillion for infrastructure issues. This includes roads, railways, bridges, and airports.

When the bill was signed, Biden said that it was “proof that despite the cynics, Democrats and Republicans can come together and deliver results.”

In today’s polarized political climate, the fact that the legislation got passed is a real achievement. The infrastructure bill provides funding for much of the country’s aging and crumbling roads, railways, tunnels, and airports.

It also presents a real opportunity for New York City and its surrounding communities. Indirectly, this bill will support both the residential and commercial real estate market. It will raise property values and help make the city more attractive to visitors, businesses, and everyone living here.

Drive around New York City or drive to JFK airport, and you’ll see how bad the roads are.

Roughly 80% of the funding in this bill is for bridges and roads. So maybe they will fix the potholes and repave the roads. These days, the roads are jam-packed with commuters avoiding the subway. To give you an idea of how bad the situation is, New York State Senator Tim Kennedy mentioned that around 1,700 bridges and 7,300 miles of road are in poor condition.

One road that is scheduled for repairs is the Brooklyn Queens Expressway. This highway runs along the East River, accommodating 150,000 vehicles a day. It’s in pretty bad shape. It seems that concrete chucks are known to fall from this crumbling road. One proposal recommends demolishing the BQE altogether and replacing it with a below-ground tunnel. We will see how much traction that plan gets.

There are also plans to cap a two-mile section of the Cross Bronx Expressway that dips below grade level. Trees and grass will be planted over the covered areas, and these will be public parks. This plan has particularly strong social appeal. The Cross Bronx Expressway was part of a “Robert Moses” city plan from the 1950s. The expressway was built right in the middle of a minority neighborhood in the Bronx. These parks will bridge sections that have been physically divided for decades.

Both of these planned projects will improve the quality of life for New Yorkers. They will also speed the commutes of people driving into the City for work.

One creative way to use some of these roadway funds is to install and expand bike lanes. Cycling to and from work has become increasingly popular in Manhattan. The Citibike rental program is popular and successful. However, when cyclists don’t have dedicated lanes, they can end up riding through car traffic or passing dangerously close to pedestrians. Creating more bike lanes will protect both cyclists and pedestrians.

For many in this city, the only transportation options that matter are subways and trains. Before the pandemic, five and a half million people rode New York City’s subway each weekday. That’s larger than the populations of half the states in the U.S.

Rail commuters should eventually see a tangible improvement with this legislation assuming the funds are used efficiently.

Over $10 billion is allocated for MTA construction projects. It is a good time for the MTA to start upgrades, repairs, and new projects. Ridership is up, but it hasn’t returned to 2019 levels just yet. Transit workers still have breathing room for track repairs and train improvements.

The legislation includes $6 billion to extend the 2nd Avenue subway. This section of the Q train currently runs from Midtown to 96th Street. It provides the Upper East Side quick access to business districts in Midtown and Lower Manhattan.

It took nearly a century to finish the current 2nd Avenue track. The endless construction became a joke. The noise and drilling on the Upper East Side were horrible when they were building the last leg of the track. Vibrations from construction sent rodents onto the sidewalks. It was a real relief when the first section finally opened in 2017.

This extension would extend the track to 125th Street in East Harlem. It’s planned to be completed between 2027 and 2029. This extension will improve work commutes for many uptown residents. It will increase residential property values in and greatly improve access to Midtown East from Uptown Manhattan.

One particularly exciting project that this bill facilitates is the long-delayed Hudson River Tunnel.

This tunnel is part of a larger Gateway Project that includes repairs for damage from Superstorm Sandy that happened in 2012. The plan for the Hudson River Tunnel would add two new tracks intended to add capacity and redundancy for commuters between New Jersey and New York, while making it easier to perform repairs on existing tunnels.

This tunnel has been under construction for years. In 2010, former New Jersey governor Chris Christie abruptly canceled his state’s funding. The unfinished tunnel was has been collecting dust for more than 10 years.

Now the federal government is picking up the slack. The Infrastructure bill earmarks $8 billion specifically for this project. Another $30 billion is going to Amtrak. That cash could also be used for the tunnel.

Construction on the Hudson River Tunnel should start in August 2023.

For office tenants in Manhattan, all these rail improvements are good news. Employees have gotten a taste of life without a commute. An improved transit system would act as an incentive for them to return to the office.

Now, there is more in this legislation than road and rail investment. Air travel will see some assistance, too. $150 million dollars will fund upgrades at LaGuardia Airport. Nearly $300 million is allocated for Kennedy Airport.

LaGuardia Airport, in particular, is a mess. For decades, it has been cramped, dirty, and confusing to navigate. New York’s Airports are the main international hubs for tourists, business travelers and investors – making them vital to the city’s economic recovery. Since the tourism sector has been hit particularly hard by the pandemic, it makes a lot of sense to improve airport operations in order to make it easier for tourists to visit New York in the future. After all, the tourism sector is a major economic driver for the city.

Lastly, this legislation contains funding for environmental projects, including $7.5 billion to blanket the country with electric vehicle charging stations. If you own a Tesla or another type of EV, it will become a lot easier to keep your vehicle charged.

This week, a statewide poll revealed that 66% of New York voters support laws requiring all new cars to be electric by 2030. In order for the city to support these types of future initiatives, investments in infrastructure for electric vehicles have to start today.

In general, when roads and railway networks are upgraded, it causes nearby property values to increase. This infrastructure spending will contribute to making residential and commercial real estate options in Manhattan more appealing.

It’s also important to remember that construction is a major business sector in New York City. As Chuck Schumer has recently said, this bill will “create good paying jobs for communities that need it most.” These jobs would in turn bring employees into different parts of the city where they would help local restaurants, hotels and other service-oriented businesses that have suffered during the pandemic.