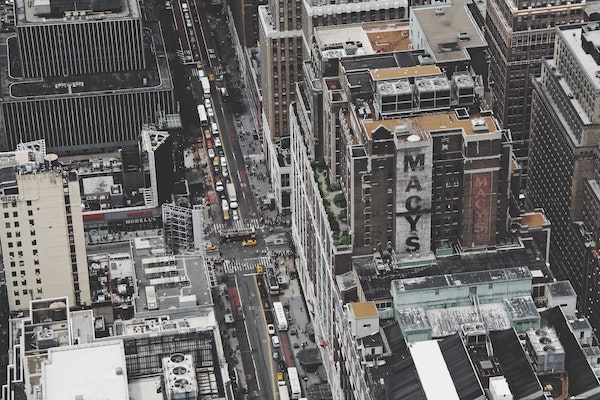 The current standoff between Macy’s and (indirectly) Amazon over signage rights in Herald Square has been getting extensive coverage as the case makes its way through the courts. However, what many may not realize is how relevant this exact location has been throughout the history of the city.

Much like Rock City in American Gods, Midtown South‘s Herald Square harbors complex relevance deeply rooted in New York City history. The square at 34th and Broadway has seen several big names of their day clash over some of the best-located storefronts. This is not Macy’s first battle on these grounds. The same sign, fiercely guarded now, is a reminder of one of the company’s long-standing real estate conflicts.

Broadway can be partially traced back to the Wickquasgeck trail. This was the principal of several routes initially carved by generations of Native American inhabitants of the region. When the Dutch West India Trading company began moving into the area, settlers widened the southern sections of the trail. They thus adjusted the route for more convenient access into Fort Amsterdam.

By the 1790s, it had become the most lucrative port city in the Americas, and its growth prompted preparation. The Commissioner’s Plan of 1811 sought to cast an orderly, attractive, and commanding city. It would lead the newly formed country into the next century. The intersection that is home to Herald Square today is the result of an exception to that plan. Specifically, Broadway was not supposed to extend beyond 23rd Street, where a pause in the grid accommodated military parade grounds.

The 1876 opening of the Sixth Avenue elevated railroad made it easier for New Yorkers to move north and fill in the planned Midtown blocks. Consequently, the avenue became a prime location for mid-range stores. One such shop was “R.H. Macy Dry Goods,” which opened in 1858 at Sixth Avenue and 14th Street. The store was steadily expanding, thanks to innovative publicity like themed exhibits, illuminated window displays, and the first in-store Santa Claus.

Macy, Margaret, and the Revolution of Retail

Many see the moment Santa Claus reaches Herald Square at the end of each Thanksgiving Day Parade as the official start of Christmas season. And, although this location is now synonymous with Macy’s, it took a lot of work to make it so.

By the early 1900s, several U.S. retail corporations were competing for the title of “world’s largest.” They were all drawn to the commercial district that had engulfed Herald Square. Around the same time, this crossroad harbored the headquarters of The New York Herald (for which the square is named), The New York Tribune, and LIFE Magazine. This confluence of commerce and communication infused the Gilded Age of newspaper advertising, of which Macy’s took full advantage.

Macy’s had a later start than its main competitors, Gimbels and Siegel-Cooper. But innovation in publicity would give the young corporation the competitive edge it needed. During the first year in activity, R.H. Macy spent $2,800 on advertising, a gamble which was unheard of in retail at the time. The ads were revolutionary in that they included item prices, therefore allowing the clients to identify and introduce themselves confidently. In 1866, Macy was among the first to promote a woman to an executive position — while superintendent Margaret Getchell secured further advantages in marketing, as the company’s customer base was predominantly female.

Under her management, the department store began including its trademark star on price tags and letterhead. It developed themed window displays to capture trends and draw onlookers in and basically introduced the precursor to food courts. They added a soda fountain at the center of the store, which would attract thirsty customers past various departments. While revolutionizing retail, Macy’s tripled in size.

Macy’s and the Million Dollar Corner

The largest store in the world opened in 1896 on Sixth Avenue, between 18th and 19th streets. It was the first New York department store constructed in a steel-frame building, boasting uninterrupted selling floors and skylit courts. Advertised as “a city unto itself,” it sold “everything under the sun” in “the only and absolutely fire-proof and perfectly safe store in New York City.”

The obligatory one-upmanship of the time dictated that Macy’s build bigger. In 1900, the corporation set out to secure the entire city block between Sixth and Seventh Avenues and 34th and 35th streets. However, Robert H. Smith, a Siegel-Cooper associate, outbid Macy’s for the corner building at 34th and Broadway.

Though this did not deter Macy’s from building the world’s largest department store around the holdout, Smith refused to give it up. When he finally put it on the market in 1907, Smith would sell to the highest bidder except Macy’s. The building traded for $1 million, roughly $870 per square foot, which was by far the priciest retail space in New York City.

The retail giant’s work to fuse its identity with its flagship location has continued ever since. In 1924, Macy’s kicked off “the world’s largest parade.” Then, in 1945, it secured the rights to advertise atop its shorter neighbor. The statement signage gradually evolved into the trademark shopping bag we see today, declaring Macy’s to be the world’s largest (brick-and-mortar) store. In 2008, city officials even allowed Macy’s to temporarily co-name a portion of West 34th Street as “R.H. Macy Way,” to honor the department store’s founder for the company’s 150th anniversary.