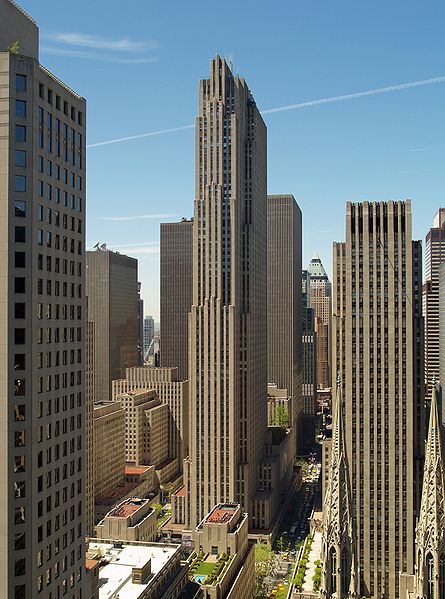 A modern executive will love working in this environment. Employees will enjoy coming to an office building home to the famous outdoor ice-skating rink, the Top of the Rock observation deck, and the studios of shows like SNL.

This Art Deco masterpiece was built in 1932 and designed by Raymond Hood. Yet the Tishman Speyer-owned property was renovated in 2014 and offers plenty of modern office space to lease in Midtown rather than the usual outdated Midtown office building.

The 70-story building is one of the most desirable destinations to lease office space in Rockefeller Center– a New York City-designated landmark and a National Historic Landmark.

Your employees will enjoy coming to work in this iconic building. With artwork and murals throughout, and walls with bronze trimmings, the second they enter the lobby, they will feel the luxury.

Besides its private dining club on the 65th floor, 30 Rock also has an on-site cafe and the Rainbow Room restaurant.

It also is a LEED Gold-certified building.

Office space for lease at Rockefeller Center, when available, tends to be full-floor spaces. Floor Plates in the building are in the 34,000-36,000 SF range. Other Rockefeller Center Buildings, such as 1270 Avenue of the Americas and 630 Fifth Avenue, have smaller office rentals available.

Getting to and from 30 Rockefeller Plaza

30 Rock is a public transportation hub in the heart of the prestigious Plaza District. You’re walking distance from Grand Central Terminal, Penn Station, and Times Square, and a stone’s throw from the following subway stations:

30 Rock also has its own Citi Bike docks and on-site bus stations.

Who is renting office space at 30 Rockefeller Plaza?

30 Rock tower is one of the most coveted locations for tenants looking for Class A office space in New York City’s most prestigious business district.

Other notable tenants include:

How much is the rent price for office space at 30 Rockefeller Plaza?

30 Rock boasts one of the most coveted business addresses in the city. As a result, office asking rents can exceed $100 per square foot, well above Midtown and the Plaza District’s average asking rents.