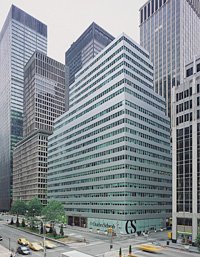 The office building at 300 Park Avenue was completed in 1954, right across the street from the Waldorf Astoria hotel and close to Grand Central Terminal. The Midtown Manhattan building was designed by Emery Roth & Sons, and it’s also known as the Colgate-Palmolive Building, as it houses the headquarters of Colgate-Palmolive. Building owner Tishman Speyer was considering plans to demolish and rebuild the property, but scratched plans when Colgate renewed its office lease in the building. 300 Park Avenue is home to various high-profile tenants, and offers state-of-the-art amenities near the coveted Plaza District of Manhattan.

The Colgate-Palmolive Building offers 773,056 square feet of Class A Park Avenue office space across 26 stories. The building consists of a 14-story base with progressively set-back upper floors, and was renovated in 1998 and 2000. The 1998 upgrade included a substantial interior renovation that brought a new lobby, a retrofit of the HVAC system, and a new fire alarm, among others. In 2000, the building’s exterior was renovated, and the facade was outfitted with new high-performance windows, aluminum spandrel panels, and retail storefronts.

Owned by Tishman Speyer, 300 Park Avenue offers amenities such as views of the St. Bartholomew’s Church, 24-hour security, turnstiles with keycard access, a law library, a conference center, a newsstand, and a messenger system. The property has also earned LEED Silver certification for its green features.

Getting to and from 300 Park Avenue

The Colgate-Palmolive Building is convenient to Grand Central Terminal, just four blocks away from the subway lines served at the station, including the 4, 5, 6, and 7 trains. The office building at 300 Park Avenue is also in close proximity to Rockefeller Center, Radio City Music Hall, Times Square, Central Park, and Fifth and Madison Avenues.

Who is renting office space at 300 Park Avenue?

How much is the rent price for office space at 300 Park Avenue?

Office asking rents at 300 Park Avenue are not for the faint of heart. Its strategic location on the pricey Park Avenue corridor, alongside the best-in-class tenant roster within the building push office rents above $100 per square foot. Park Avenue is one of the priciest office clusters in New York City, alongside Hudson Yards and the Plaza District.