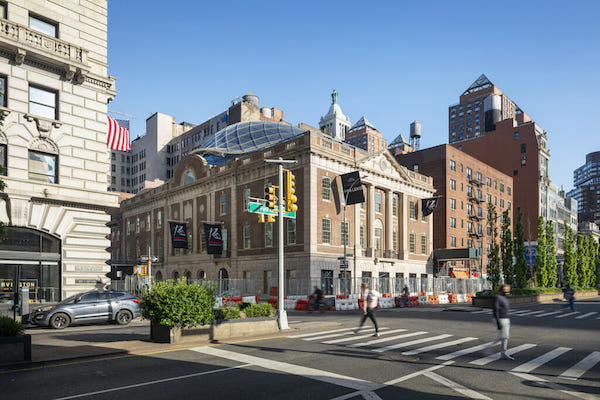 The dome-shaped office building at 100 East 17th Street in Midtown South was originally completed in 1928. Known as Tammany Hall, the three-story building was designed by Thompson, Holmes & Converse, and Charles B. Meyers. It was built for the Tammany Society, and in 2013, it was designated a city landmark by the New York City Landmarks Preservation Commission. The property was redeveloped in 2020 and offers modern office space and state-of-the-art amenities, fit for businesses of any size and in any industry.

Tammany Hall, nowadays known as 44 Union Square East, offers roughly 74,000 square feet of Class B Union Square office space. The redevelopment that ended in 2020, spearheaded by BKSK Architects, added three new office floors to the structure and even earned an AIA design award. The six-story building is an ideal fit for either a single, full-building tenant, or multiple retail and office tenants, and the landlord is open to opportunities. Floorplates range from 4,444 to 15,058 square feet in size.

Tenants will access signage and branding options with exposure to the bustling Union Square. The current owner, Reading International, has upgraded the building to include brand new infrastructure and mechanical systems, as well as state-of-the-art heating and cooling systems. The unique highlight of 44 Union Square East is its tortoise shell-shaped structure that completely covers the fifth and sixth floor, letting in abundant natural light down through to the fourth floor.

Getting to and from 44 Union Square East

44 Union Square East benefits from an excellent location just steps away from Union Square, in the heart of Midtown South. Those working in the building have easy access to a plethora of shopping, dining, and leisure destinations in the area. Public transportation is also easily accessible, via nearby stations on 23rd Street, 14th Street, and Third Avenue.

How much is the rent price for office space at 44 Union Square East?