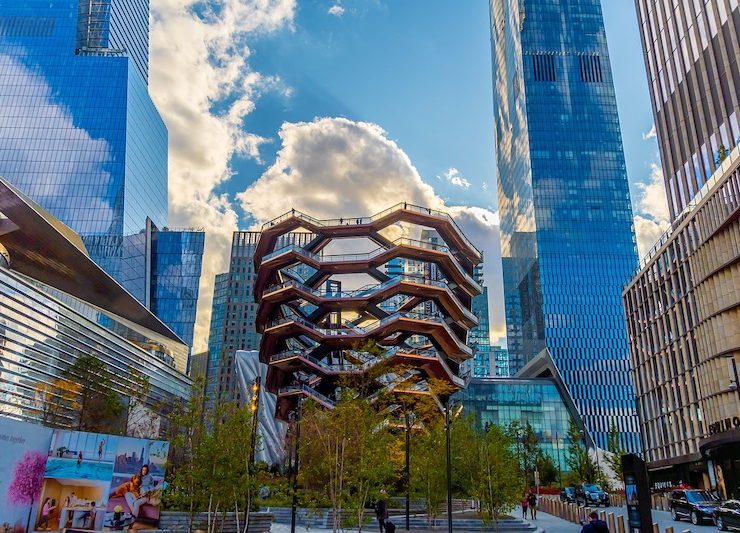 Online retail giant Amazon might have backed out of its plans to build HQ2 in Long Island City, but that doesn’t mean that it’s lost interest in the New York City commercial real estate market. Quite the contrary, it seems, as Jeff Bezos’ company has recently leased 335,000 square feet of Manhattan office space, at SL Green’s 410 Tenth in Hudson Yards.

News of the lease was first reported by The Wall Street Journal a few days ago, and the internet has been abuzz about it since. When Amazon announced it wasn’t coming to Queens at the beginning of 2019, many feared that the city was losing its appeal to tech companies, but those fears are obviously unfounded. Amazon will consolidate its presence in NYC with a new office in the glossy Hudson Yards neighborhood, bringing more than 1,500 employees to the area. And that’s without any tax breaks or incentives. Well, for the most part.

While there’s been much talk of this new lease and how it contradicts the reasoning that Amazon presented when pulling out of LIC, Hudson Yards isn’t exactly free of incentives, either. An earlier New York Times article reported that tax breaks and other government assistance for Hudson Yards had reached nearly $6 billion in March 2019, and future properties developed here can also benefit from tax breaks. According to the newspaper, Hudson Yards tenant BlackRock can get $25 million in tax breaks if it adds 700 jobs to the neighborhood, while WarnerMedia could get $14 million, and L’Oreal USA could be in line for $5 million. So Amazon might be able to benefit from some tax breaks after all, even if they won’t compare to the $3 billion it wanted in order to build HQ2 in Queens.

The news of Amazon’s lease comes on the heels of another big tech announcement. Facebook is reportedly eyeing 700,000 square feet of Midtown Manhattan office space, at the Farley Building, not long after signing up for 1.5 million square feet at Hudson Yards. It would seem that the New York City tech scene is doing quite well; Facebook, Amazon and Google keep expanding their office footprint in the city, which will certainly signal to other businesses in the industry that the market is worth investing in.

Amazon will be joining First Republic Bank at SL Green’s 410 Tenth Avenue, previously known as 460 West 34th Street. SL Green, the city’s biggest office landlord, acquired a majority stake and controlling interest in the property located between 33rd and 34th streets in May, and First Republic signed up for 211,521 square feet in April.

“The selection of 410 Tenth Avenue by Amazon and First Republic Bank is a great endorsement of our exciting redevelopment plan for the building, which is now 96.2% leased only seven months after acquisition,” Steve Durels, executive VP and director of leasing and real property at SL Green, said in an official statement.

The building owner is currently in the midst of a major redevelopment of the 20-story, 638,000-square-foot building formerly known as the Master Printers Building. The redevelopment will honor the property’s industrial heritage, while bringing Class A features and amenities to future tenants. The effort will include the relocation of the lobby entrance from 34th Street to 33rd Street, as well as the creation of a new glass box lobby with new 9-foot-high, industrial-style windows. Other upgrades include new elevators, double-height storefronts, and a 5,000-square-foot roof deck along with a 3,000-square-foot tenant lounge. The former industrial building offers the type of open, flexible loft space that tenants in creative industries look for nowadays. Floor plates boast 13.5-foot slab heights with mushroom-capped columns, offering tenants flexibility and room for creativity.

410 Tenth is also conveniently located right across the street from the bustling Hudson Yards office complex, one of the priciest and most coveted business districts in New York City, so tenants at the building will be in good company. Amazon estimates it will be moving into the building sometime in 2021.

If you’re curious to know more about this lease and about Hudson Yards, check out the video below, in which Metro Manhattan Principal Broker Alan Rosinsky talks further about the subject: