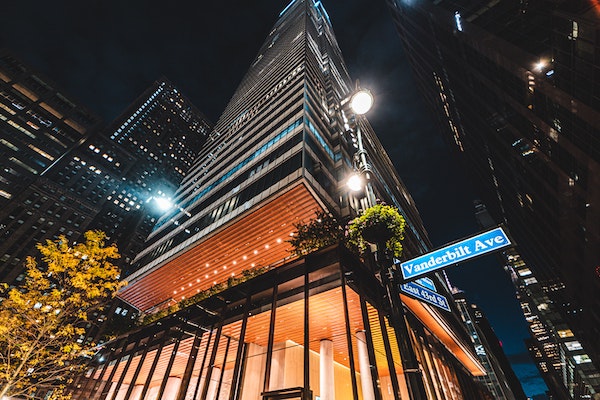 Midtown Manhattan is home to some of the most iconic skyscrapers in the world, and tenants are willing to pay top dollar for a prestigious business address in this market. Trophy office buildings appeal to commercial tenants looking for prestige, high-class amenities, upscale restaurants, and exquisite views. These advantages come at a steep price, with average rents for these trophy properties often surpassing $100 per square foot and reaching close to $200 per square foot, in some cases. Below you will find a description of the top ten Class A office buildings in Midtown Manhattan, detailing the available amenities they offer, and the value they provide to corporate tenants seeking an appealing office environment for their teams.

The 1.8 million-square-foot One Vanderbilt is the crown jewel of Midtown Manhattan and the most significant new commercial development to rise in the Grand Central submarket. The 93-story tower was completed in 2020, and the project cost a whopping $1.4 billion. Situated right next to Grand Central Terminal, the building features best-in-class amenities, including an outdoor terrace, a 30,000-square-foot tenant-exclusive amenity floor, floor-to-ceiling windows, column-free office space, and much more. The ground floor houses a world-class restaurant, Le Pavillon, led by Chef Daniel Boulud.

One of the most recognizable staples on the Manhattan skyline, The Empire State Building needs no introduction. The 2.3 million-square-foot landmark at 350 Fifth Avenue was completed in 1931 and is one of the most desirable properties for companies looking for trophy office space for lease. Amenities at the iconic tower include a 15,000-square-foot fitness center, a tenant-exclusive conference center, state-of-the-art building infrastructure, and eight on-site dining options, including the STATE Grill and Bar and Tacombi.

The 30-story Class A office property at 420 Lexington Avenue, also known as the Graybar Building, is an ideal destination for tenants looking for trophy office space in an excellent location close to Grand Central Terminal. The 1.2 million-square-foot building is owned and managed by SL Green, one of NYC’s top landlords, and was fully renovated in the early 2000s. Amenities include a messenger center, 32 passenger elevators, state-of-the-art HVAC, direct access to Grand Central Terminal, and LEED Gold certification for energy efficiency.

The GM Building was completed in 1968 and features close to 1.8 million square feet of trophy Manhattan office space. It’s one of the largest buildings in the city, conveniently located at the southeast corner of Central Park between Fifth and Madison Avenues, in the heart of the coveted Plaza District. The building was upgraded and renovated several times over the years and features best-in-class amenities, including a street-level public plaza with 65-foot-long fountains and marble. The ground floor is home to the now-iconic Apple ‘Cube’ Store, which opened in 2006.

The 2.9 million-square-foot 50 Hudson Yards is the fourth-largest commercial office tower in the city, taking up an entire block. The 58-story tower is scheduled for completion in late 2022; it will be one of few buildings in the area to accommodate over 500 employees per floor. It’s an ideal destination for corporations and companies looking to expand, and it comes with a myriad of ultra-modern amenities. Tenants enjoy views of the Hudson River and the Vessel, outdoor terraces, private sky lobbies, a porte-cochere, and valet parking, among many other amenities. Office floor plates feature floor-to-ceiling windows and up to 60,000 contiguous square feet.

30 Rockefeller Plaza, also known as 30 Rock, is one of the most well-known properties on the NYC skyline. The 2.5 million-square-foot tower was completed in 1932 and houses the famous outdoor skating rink, the ‘Top of the Rock’ observation deck, and SNL and 30 Rock studios. Building owner Tishman Speyer renovated the tower in 2014, bringing it to modern standards that appeal to modern office tenants. Amenities include an impressive lobby, garage parking, and direct access to a 70,000-square-foot underground shopping concourse. 30 Rock is a highly coveted destination for media, communications, law, and financial services businesses.

The Reuters Building at 3 Times Square is an 860,000-square-foot trophy Class A office tower built in 2000. The building is located right in the heart of the buzzing Times Square submarket and is home to Thomson Reuters’ headquarters. Amenities include energy-efficient glass, column-free office space, above-standard ceiling heights, and proximity to numerous shopping and dining destinations. It also boasts terraces on select floors. Floor plates range from 28,000 to 35,000 square feet.

Completed in 1927, the 625,000-square-foot tower at 3 Columbus Circle is conveniently located in one of the busiest parts of Midtown. The 26-story building takes up an entire square block and sits right across the street from Central Park and the Time Warner Center. 3 Columbus Circle was fully renovated in 2011 by Gensler and offers 24/7 access and security, views of the Manhattan skyline, a full-time lobby attendant, USPS drop-off, and outdoor terraces.

The 700,000-square-foot office tower at 441 Ninth Avenue was built in 1982 and is also known as Hudson Commons. Initially, the property served as an industrial warehouse but was later converted to Class A office space and expanded to include an additional 280,000 square feet of commercial space. Amenities include floor-to-ceiling windows, 14 terraces and balconies, efficient floor plates, mushroom-capped columns, on-site parking and event space, and floor plates ranging from 16,000 to 50,000 square feet. The tower sold for more than $1 billion in late 2021, in NYC’s largest investment sale since June 2019.

The Chrysler Building is one of the most prestigious skyscrapers in New York City and one of the most desirable destinations for office-using companies. The 1.1 million-square-foot Art Deco office tower is a National Historic Landmark and offers Class A, LEED Gold-certified office space in the heart of the Grand Central submarket. It was fully renovated in 2000 and features amenities like 24/7 access and security, a concierge-attended lobby, direct access to Grand Central Station, and energy-efficient systems and central HVAC.

Are you thinking of setting up your business in a convenient location in Manhattan? Are you looking to lease space in a modern building offering state-of-the-art amenities? To learn about available office or retail space, call Metro Manhattan Office Space at (212) 444-2241 or email us at info@metro-manhattan.com.