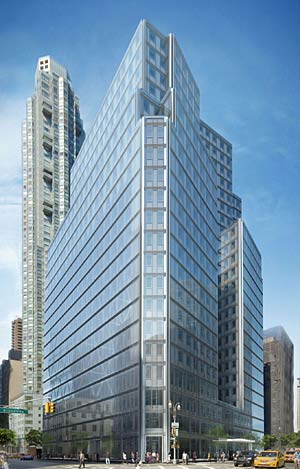 The office building at 3 Columbus Circle in Midtown Manhattan was designed by Shreve & Lamb and completed in 1904. It occupies a full square block within the Columbus Circle redevelopment and located across the street from Time Warner Center and Central Park. The building formerly known as the Newsweek Building was renovated in 2011 and is currently owned by The Moinian Group. Its office tenant roster includes high-profile tenants in industries like media, marketing, fashion, and financial services.

The 26-story building at 3 Columbus Circle boasts an alternative address of 1775 Broadway, and features 750,000 square feet of Class A Midtown Manhattan office space. The building was completely renovated in 2011, and offers a full-time lobby attendant, temperature-controlled workspaces, 24/7 access, and nearly 40,000 square feet of retail space. Its glass curtain wall offers panoramic views of Central Park and the city skyline, and the tower also incorporates terraces, on-site security and management, and USPS drop-off.

The Moinian-owned building offers a wide range of floor sizes for office spaces, with floor plates spanning from 21,000 to more than 40,000 square feet.

Getting to and from 3 Columbus Circle

The office building at 3 Columbus Circle lies just steps away from various surface and underground public transportation options available on Broadway, 8th Avenue and 57th Street. It’s convenient to many bus lines, ferries and subways, including the N, R, Q, and E trains. Various parking garages are available in the neighborhood for those who prefer to drive to work, however, it’s worth keeping in mind that Columbus Circle is almost always heavily trafficked.

Who is renting office space at 3 Columbus Circle?

How much is the rent price for office space at 3 Columbus Circle?

Office rental rates at 3 Columbus Circle are roughly on par with the Midtown Manhattan average, which reached $87 per square foot in the first half of 2019. The Columbus Circle submarket also commands above-average office rents, due to its location close to Central Park, Times Square, and Rockefeller Center. The area is also home to numerous major companies in investment management, banking, real estate, and media, such as Hearst Media, CNN, Bank of America and Steelcase.