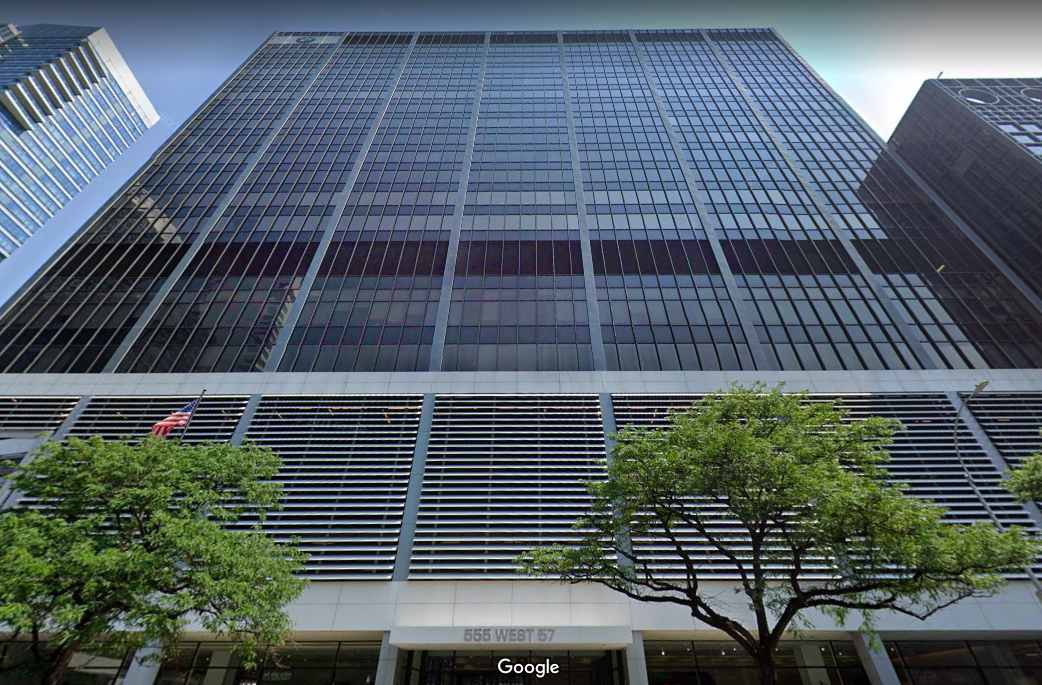 The striking office building rising between 10th and 11th Avenues in Midtown Manhattan was completed in 1973. It was designed by Eggers & Higgins, the same firm that designed the late key works of John Russell Pope, including the Jefferson Memorial and the original National Gallery Building in Washington, D.C.

555 West 57th Street was previously known as the Ford Motors Building, as it housed a spacious ground-floor showroom for the company. Nowadays, that showroom is home to BMW, so the building is also known as the BMW Building. The property is also home to several high-profile office tenants and has been renovated from top to bottom.

The 20-story building at 555 West 57th Street incorporates more than 1 million square feet of Class A office space for rent in Columbus Circle. The building is owned and managed by SL Green and was fully renovated in 2014. Upgrades included new entrances, an outdoor plaza area, new hallways, bathrooms, etc.

The ground floor is home to a 220,000-square-foot showroom occupied by BMW, while the top floors offer panoramic views of the Manhattan skyline and the Hudson River. Other amenities include large, efficient, center-core floorplates, on-site parking, proximity to public transportation, 24/7 access, and state-of-the-art HVAC and security.

Getting to and from 555 West 57th Street

The office building at 555 West 57th Street is conveniently located between two busy Midtown corridors, namely 10th Avenue and 11th Avenue. Those working in the building have easy access to various public transportation options and are also just a short walk away from Columbus Circle and Lincoln Center, among other destinations.

Who is renting office space at 555 West 57th Street?

How much is the rent price for office space at 555 West 57th Street?

Office asking rents at 555 West 57th Street start at $65 per square foot but can vary depending on the length and terms of the lease agreement.