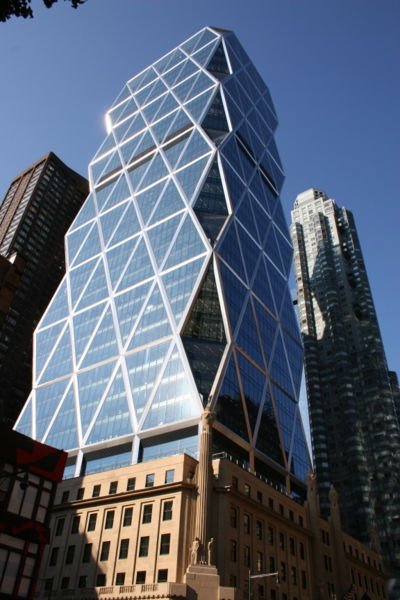 The base of the Hearst Tower was originally built back in 1928 by William Randolph Hearst. The International Magazine Building, as it was called, was meant to be the base for a taller tower to house the Hearst media empire, however, its completion was delayed due to the Great Depression.

In 2006, Sir Norman Foster of Foster & Partners completed the project at 300 West 57th Street, and the Hearst Tower rose 600 feet above the landmark six-story base. It was the architect’s first high-rise design for New York City, the city’s first green office skyscraper, and the first tower to break ground after 9/11. The Hearst Tower has been highly praised, both for its innovative design, its groundbreaking sustainable features and its state-of-the-art amenities. It is owned and occupied by Hearst, and managed by Tishman Speyer.

The Columbus Circle tower was the first skyscraper in New York City to earn LEED Gold certification for its sustainable features, which include a special glazing to minimize heat gain, energy efficient heating and cooling systems, and a rainwater-harvesting mechanism. Consequently, operating costs at the tower are 25% lower for tenants than the average office building.

Other onsite amenities include a Hearst staff cafeteria and auditorium, a 9,000-square-foot fitness facility and wellness center, meeting and dining rooms on the 44th floor, and sweeping views of the city skyline.

Getting to and from Hearst Tower

The Hearst Tower benefits from an excellent Midtown Manhattan location close to Columbus Circle, offering tenants access to Central Park and the Time Warner Center. The building is convenient to several New York City Subway lines, including the A, B, C, D, 1 and 2 trains.

Who is renting office space at Hearst Tower?

The office building at 300 West 57th Street in Columbus Circle is fully occupied by Hearst, which operates most of its magazines here, including Cosmopolitan, Esquire, Harper’s Bazaar, Marie Claire, Good Housekeeping, and Seventeen.

Retail tenants within the building include FedEx, Balducci’s and Sur La Table.

How much is the rent price for office space at Hearst Tower?

Office asking rents at the Hearst Tower tend to be roughly on par with the Midtown Manhattan average, which often goes up to $90 per square foot or even more for Class A offerings. However, as the tower is owner-occupied, there aren’t any office spaces available for lease within the building.