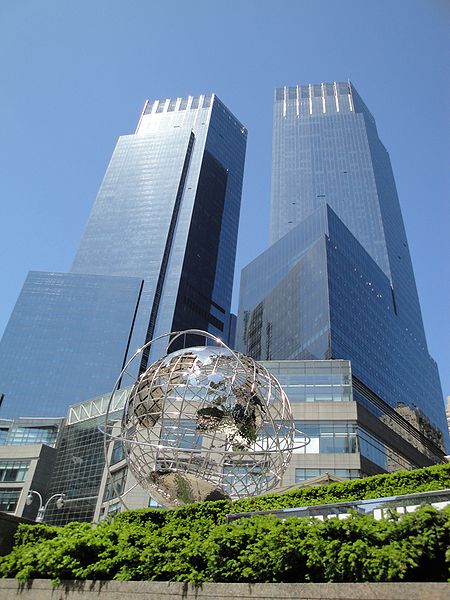 The twin-tower Time Warner Center complex at 60 Columbus Circle was the first major project to be completed in Midtown Manhattan following 9/11. Designed by David Childs of Skidmore, Owings & Merrill and developed by Related Companies, the two 55-story towers were completed in 2003 and served as the headquarters of Time Warner for many years. However, the media giant will soon be moving its corporate base to 30 Hudson Yards, and Deutsche Bank will take over the 1.1 million-square-foot space left vacant in 2021, when the complex will be renamed the Deutsche Bank Center.

The Time Warner Center offers 2.8 million square feet of office, residential, retail and hotel space, and is currently owned by Related, the Abu Dhabi Investment Authority and GIC Private Limited. The Columbus Circle property was acquired by its current owners from Time Warner in 2014, for $1.3 billion.

Getting to and from Time Warner Center

The Time Warner Center is situated adjacent to Columbus Circle, which was meant to be trafficked by car, however, the intense traffic in the area leads many to opt for public transportation options. Those working within the office complex have easy access to the 1, 2, A, B, C, and D subway lines, and the M5, M7, M10, M20 and M104 buses. The 59th Street subway station is conveniently located right underneath Columbus Circle.

Who is renting office space at Time Warner Center?

The two-building complex situated at the border between Midtown Manhattan and the Upper West Side is currently home to various high-profile office-using tenants like Time Warner, CNN, Amazon and Related. Deutsche Bank will replace Time Warner as the anchor tenant in 2021, occupying 1.1 million square feet of office space within the complex.

How much is the rent price for office space at Time Warner Center?