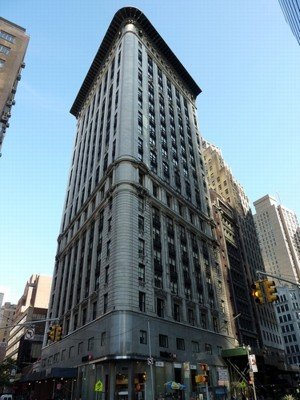 The office building located at 1790 Broadway in the Columbus Circle area of Midtown Manhattan was completed back in 1912. Architects Carrere & Hastings, who designed the New York Public Library, were commissioned by the U.S. Rubber Company to design their headquarters at the corner of 58th Street and Broadway. The building that resulted had a striking design that still makes it stand out among the limestone buildings in the city.

The building was renovated in 1990, in an effort that brought its amenities to modern standards. Redubbed 5 Columbus Circle, 1790 Broadway is currently home to various office tenants in industries like media, universities, finance and law.

Getting to and from 5 Columbus Circle

The office building at 1790 Broadway is conveniently located in the heart of New York City’s best retail and dining corridors, close to a plethora of shops and upscale restaurants. The property’s location near the heavily trafficked Columbus Circle offers tenants easy access to various major subway lines, including the A, C, E, 1, 2, 3, N and R trains.

Who is renting office space at 5 Columbus Circle?

How much is the rent price for office space at 5 Columbus Circle?

Office asking rents at 5 Columbus Circle tend to be roughly on par with the average commanded in Midtown Manhattan, which hovers around $88 per square foot in 2019. The Columbus Circle submarket is highly sought after, given its proximity to Central Park and public transportation options. Consequently, office space rental rates are also on the rise here, with Class A offerings going for $78 per square foot and Class B properties priced in the low $60s per square foot.