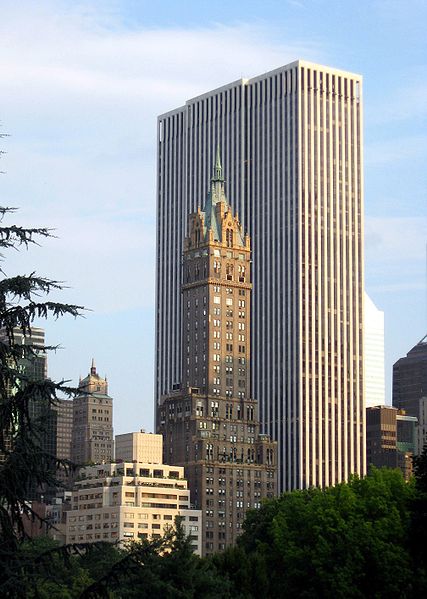 The General Motors Building at 767 5th Avenue is one of the most iconic office buildings in New York City. Built in 1968 by Cecilia Benattar and boasting a design by Edward Durell Stone, it’s one of the few buildings in the city to occupy a full city block.

Located at the southeast corner of Central Park between Fifth and Madison Avenues and 58th and 59th streets, the GM Building changed hands multiple times over the past decades. The office building fetched a higher price with each sale, and it was the object of the largest single-asset sale of 2008, when it sold to Boston Properties for $2.8 billion.

Previous owners include Donald Trump, Simon Property Group and Macklowe Properties. The property is currently owned by Boston Properties, in a joint venture with the Safra Family and Zhang Xin. The building was appraised at $4.8 billion in 2017, making it one of the priciest office towers in the city.

The General Motors Building features 1.9 million square feet of Class A office space in the coveted Plaza District of Midtown Manhattan. Each of the building’s previous owners invested in upgrading the property. Donald Trump raised the street-level plaza and added 65-foot long fountains and a marble sitting area, while Macklowe Properties invested in cosmetic renovations in 2005.

Amenities at the 50-story GM Building include sweeping views of Central Park and the Midtown Manhattan skyline and roughly 150,000 square feet of retail space. The ground level of the building features the popular and visually striking Apple ‘Cube’ Store, which opened in 2006.

Getting to and from the General Motors Building

The GM Building benefits from an excellent location next to Central Park and close to all the offerings of Fifth Avenue and Madison Avenue. The tower is convenient to the N, R, and W trains at Fifth Avenue, as well as to the green lines at a nearby Lexington Avenue station.

Who is renting office space at the General Motors Building?

The office tower at 767 5th Avenue is home to a plethora of high-profile office and retail tenants. Estee Lauder, General Motors, Macklowe Properties, U.S. Trust, Maverick Capital, Weil, and CGM Grosvenor are just some of the names on the GM Building tenant roster. Retail tenants include Apple, Balenciaga, TUMI and Under Armour.