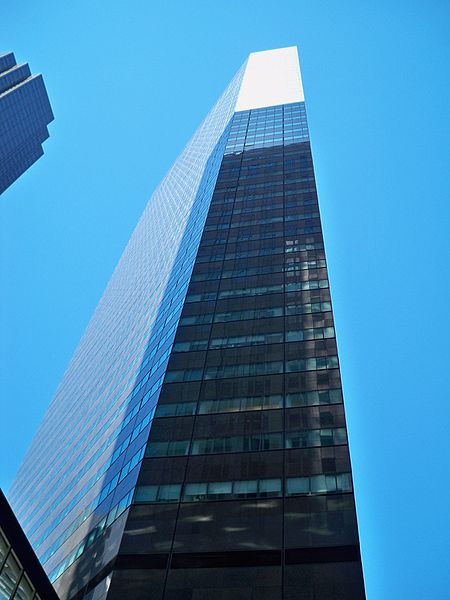 The office building at 590 Madison Avenue in Midtown Manhattan was developed by IBM and designed by Edward Larrabee Barnes & Associates. Completed in 1981, the building on the corner of East 57th Street and Madison Avenue contains an open public plaza at its base, and has a unique wedge shape. Much like Lever House or Mies van der Rohe’s Seagram Building, 590 Madison doesn’t occupy its entire lot, and the rest of the square footage is assigned to public spaces. This is due to a 1961 amendment to the city’s 1916 zoning resolution, which allowed the development of taller office buildings if they included public spaces.

The 42-story building at 590 Madison Avenue features 1 million square feet of Class A Plaza District office space. It was completely renovated in 2014 and features more than 40,000 square feet of retail space. The building’s atrium includes retail shops, food and drink kiosks, table and chairs and bamboo trees, and connects to another atrium space with the neighboring Trump Tower. The IBM Building incorporates a 78-car, tenant-only, reserved-space parking garage accessible from 56th Street, offering direct access to the lobby. Other amenities include 24/7 building access, 24-hour video surveillance, and visitor badge system.

590 Madison Avenue is currently owned by the State Teachers Retirement System of Ohio. Even though the tower is no longer owned by IBM, the tech company is still an office tenant. The building is managed by Edward J. Minskoff Equities, with CBRE in charge of leasing.

Getting to and from 590 Madison Avenue

Who is renting office space at 590 Madison Avenue?

The Class A building at 590 Madison Avenue is an appealing destination for hedge funds, financial services and equity firms looking for office space rentals in Midtown Manhattan. The building’s location in the heart of the Plaza District has drawn tenants such as Morgan Stanley, Berkshire Hathaway, NASCAR, Taurus Asset Management, and Mutual Securities. Regus also operates coworking space within the building, while the ground floor houses the Obica restaurant.

How much is the rent price for office space at 590 Madison Avenue?

Office asking rents in Midtown Manhattan’s Plaza District are some of the most expensive in the city, hovering around $87 per square foot in 2019. Asking rents at the IBM Building tend to go even higher, due to the building’s prestige and excellent location close to a plethora of shopping and dining destinations.