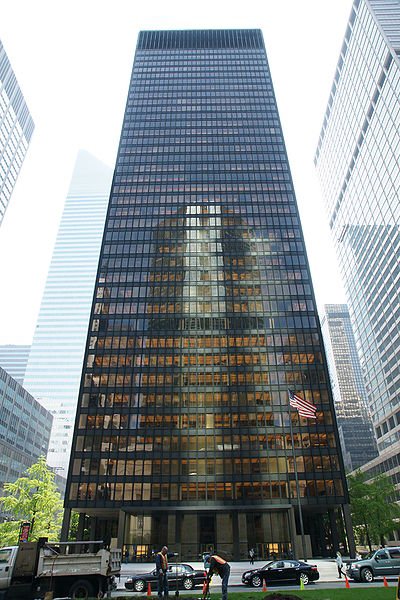 One of the finest examples of modernist architecture, the Seagram Building in Midtown Manhattan was designed by world-renowned architect Ludwig Mies van der Rohe, alongside Philip Johnson. The 38-story skyscraper was built in 1958 and it was Mies van der Rohe’s first office building and his only project built in New York City.

The tower paved the way for modern skyscraper design, and was the first office building in the city to feature floor-to-ceiling windows. The ground-floor plaza is also highly acclaimed and a popular gathering spot in the Plaza District, and skyscrapers built after the Seagram Building replicated this model. The building spurred a rezoning project that encouraged the inclusion of ‘privately owned public spaces’ at the base of office towers.

900 KSF of Class A Office Space on Park Avenue

The Seagram Building was the world’s most expensive skyscraper when it was completed in 1958 with a construction cost of $41 million. Located at 375 Park Avenue between 52nd and 53rd streets, the building features nearly 900,000 square feet of Class A office space. Floor plates range in size from 15,000 to 39,000 square feet.

RFR Realty, owner of the Seagram Building, invested in a major renovation effort in 2002, to bring the tower to modern, more energy efficient standards. Amenities at the tower include floor-to-ceiling windows, a 150-car underground parking garage, three restaurants and a spacious, elevated public plaza at the tower base. The plaza incorporates two large fountains that serve to block out the noise of the traffic on Park Avenue.

Getting to and from The Seagram Building

The Seagram Building benefits from an excellent location in the heart of the Plaza District, Midtown Manhattan’s most prestigious business cluster. Right across the street is the iconic Lever House, which boasts a similar design. The tower offers easy access to several subway lines, including the E, M, 4 and 5 trains, served by the nearby Lexington Avenue-53rd Street station.

Who is renting office space at The Seagram Building?

The Seagram Building has always been popular among law firms, financial services firms and Fortune 500 companies. Notable office-using tenants on the building’s roster include Wells Fargo, Fintech Advisory, Fried Frank, Crestline Investors, and Strategic Value Partners, among many others. The tower also houses three restaurants, namely The Grill, The Pool and The Lobsters Club, and used to house the famous Four Seasons restaurant that closed in 2016.

How much is the rent price for office space at The Seagram Building?

Office asking rents in Midtown Manhattan have reached a post-recession peak of $87 per square foot in 2019. Office rents at the Seagram Building go even higher, often exceeding $100 per square foot. The building’s ideal location and prestige make it a very popular choice for hedge funds, finance institutions and companies in the legal sector.