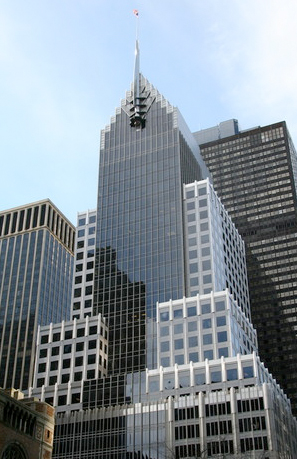 The office building at 320 Park Avenue in Midtown Manhattan was originally completed in the early 1960s with a design by Emery Roth & Sons. In 1992, Mutual of America paid $130 million to buy the then-empty office tower from Olympia & York. Then, in 1994, the building was stripped down to its core and rebuilt, in a redevelopment effort spearheaded by Swanke Hayden Connell Architects. It was the best option for Mutual, as the building was constructed before the 1961 Zoning Resolution in NYC. This means that it was significantly larger than new buildings developed in the area, so Mutual would get to keep that extra office space if it just redeveloped the existing property. Nowadays, the building is home to various high-profile office and retail tenants, and continues to house the Mutual of America headquarters.

Getting to and from 320 Park Avenue

The Mutual of America Building at 320 Park Avenue benefits from an excellent location in the heart of Midtown Manhattan and the prestigious Plaza District. Those working within the building have access to a plethora of high-end retail shops and dining venues in the area. Public transportation is also easily accessible, as the building is convenient to major subway lines, including the E, M, 4 and 6 trains.

Who is renting office space at 320 Park Avenue?

How much is the rent price for office space at 320 Park Avenue?