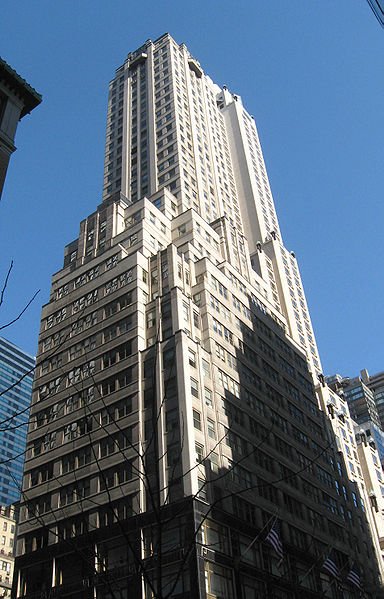 The office building at 595 Madison Avenue, also known as the Fuller Building, was completed in 1929 boasting a design by Walker & Gillette. It originally housed the headquarters of the Fuller Construction Co., which had previously occupied the Flatiron Building. The 40-story Midtown Manhattan building at 57th Street and Madison Avenue was designed in an Art Deco style and is clad in limestone with a pyramid-shaped roof. Due to its high ceilings and proximity to the artsy Upper East Side, the tower is an appealing option for art galleries, but also for businesses in the creative industries and the legal sector.

The Fuller Building was completely renovated in 2003, and now features energy efficient features and recycling programs.

The lower floors of the building were designed specifically to accommodate art galleries, and many prominent art dealers have called the tower home throughout the years. These lower floors boast a distinct facade from the rest of the floors, which are used to house office space.

Getting to and from the Fuller Building / 595 Madison Avenue

The Fuller Building is conveniently located in the heart of the coveted Plaza District in Midtown Manhattan. Commuting to the area is seamless, as the building is located near several subway lines, including the 4, 5, 6, N, R, and F trains, as well as the M31, M57 and Q32 buses.

Who is renting office space at the Fuller Building?

The Fuller Building has housed many of the most prominent art galleries in the city since it was completed in 1929. In recent years, many of these galleries have moved to up-and-coming art districts like SoHo/NoHo, however, the building still houses various galleries today. Notable tenants include Jacobson Partners, Corneliani, James Goodman Gallery, Gitterman Gallery, Tom Ford, Elite, and Beachtree Capital Partners. Retail tenants include Coach and Prada.

How much is the rent price for office space at the Fuller Building?

Office asking rents at the Fuller Building tend to hover around the $87 per square foot average commanded in Midtown Manhattan. The Plaza District is one of the priciest submarkets in the city, home to a plethora of high-profile corporations in the legal and financial sector, as well as tech companies and renowned art galleries. Consequently, office space here comes at a premium, however, the Plaza District is currently slightly more affordable than the popular Hudson Yards.