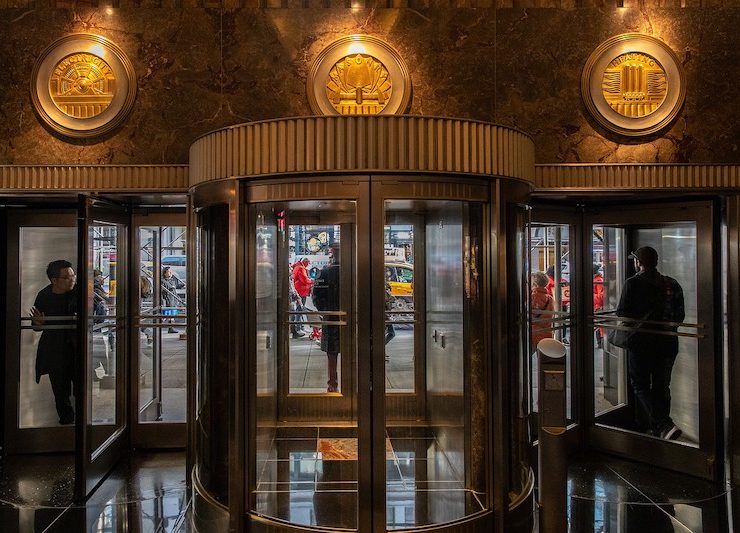 Art Deco, the pairing of exquisite craftsmanship with rich materials, and a clear statement of luxury, glamour, exuberance and overall progress, has a strong presence in New York City. As one of the first truly international styles, Art Deco combines a diverse range of styles on the path to what is now considered purely modern–from the bold geometric forms of Cubism and Secessionism, to the vivid nuances of Fauvism and the Ballets Russes and the exotic styles of Oriental countries.

New York City’s vertical expansion in the 1920s and 1930s materialized into some of the most beautiful and iconic landmarks in the world. Companies large and small have set up offices in them, attracted by their beauty, history and excellent location, sending a powerful message about their status. If you are also interested in renting office space in one of these architectural beauties, check out the list below and see which better suits you and your firm.

Located at 405 Lexington Ave. in Midtown Manhattan’s Plaza District, the Chrysler Building is one of the masterpieces of Art Deco style, and one of the most beloved skyscrapers in the city, known for its elegant, terraced crown, with a sunburst pattern. The 77-story building completed in 1930 was, at that time, the tallest man-made construction in the world. Behind its stunning details was New York architect William Van Alen, who designed it for Walter Chrysler, head of the Chrysler Corp. The latter paid for it with his own money as his plan was to pass it on as inheritance to his children.

Nonetheless, the development was to be used by his company, and as such, the architect included in the design subtle hints to the car manufacturing company. Examples include the building’s spire, which was inspired by a radiator grill, and the gargoyle sculptures positioned on the 31st floor, inspired by the 1929 Chrysler hood ornaments. The Chrysler Building served as the home of Chrysler Corp. until the mid-1950s and was designated a National Historic Landmark in 1976.

Its owners since early 2019 are RFR Realty and Signa Holding, which acquired it for $150 million, but it is still managed by its previous owner, Tishman Speyer. Currently, its tenant roster comprises firms from various industries such as law firms, medical operators, as well as media and communications companies. Rents at the Chrysler Building were slightly more favorable than the average Midtown Manhattan figure, floating below $70 per square foot in 2019.

The 102-story tower rises at 350 Fifth Ave. in Midtown Manhattan, making it one of the most prestigious addresses in the world. The limestone structure was designed by architecture group Shreve, Lamb & Harmon Associates and, just like the Chrysler Building, the Empire State Building competed in what the media called at the time the “Race into the Sky.” The Chrysler Building held the top spot for about one year, being completed a year prior, but the 25 extra floors of the Empire State project helped it take and hold the title of the world’s tallest building for four decades. That is, until late 1970, when the World Trade Center North Tower in Downtown Manhattan was completed.

Spanning some 2.3 million square feet of office space, the massive development was assigned its own zip code in 2012, becoming one of the 43 buildings in New York City to hold their own zip codes. Specifically, the Empire State Building has 85 stories of commercial and office space, an observation deck on the 86th floor, while the spire is hollow with no floors between level 86 to 102. The skyscraper was designated a National Historical Landmark in 1986.

Significant renovations that started in 2009 upgraded the building’s energy efficiency systems, which, in 2011, materialized into a LEED Gold certification from the U.S. Green Building Council. Currently, the landmark is owned by Empire State Realty Trust, which acquired it in 2013 for $771 million from Helmsley Enterprises. Office rent prices at the Empire State Building ranged from $75 per square foot on the lower floors to $86 per square foot on the upper floors in 2019.

Anchoring the Rockefeller Center project, the landmark tower stands out as the heart of the Midtown Manhattan area, and this is reflected in the office asking rents, which often exceed $100 per square foot, well above the average of $87 per square foot commanded in the submarket in 2019.

The 49-story tower at 570 Lexington Ave. in Midtown Manhattan was completed in 1931, designed by Cross & Cross in a style similar to the St. Bartholomew Church nearby. Although built more than a decade apart, the two Gothic-inspired landmarks share the same brick color with coordinated terracotta decorations. The General Electric Building–not to be confused with the 30 Rockefeller office building–originally known as the RCA Victor Building, was designated a NYC Landmark in 1985 and was added to the National Register of Historic Places in 2004.

The GE Building totals some 450,000 square feet of office space, and is a good fit for smaller businesses and startups, as its floor plates range from 4,000 square feet on the upper floors to 18,900 square feet of divisible space at the base. The average rent in the building was $75 per square foot in 2019.

Built in 1927, the 24-story building at 180 Madison Avenue in the Murray Hill neighbourhood flaunts the same architectural style as its taller siblings. Located just one block from the Empire State Building and owned by Clarett Group/Prudential and managed by CB Richard Ellis, this asset too is suitable for startups and small- to mid-sized firms, as its plates range from 8,000 to 15,000 square feet. In total, the 180 Madison Avenue building encompasses 280,000 square feet.

Right across the street from the Chrysler Building, at 122 E 42nd St. in Midtown Manhattan, the Chanin Building rises 56 stories high. Sloan & Robertson designed it, assisted by Irwin Chanin’s own architect Jacques Delamarre, combining brick and terracotta above the base that boasts black Belgian marble. Built in 1928, it has been a dominant landmark at its time and the building had an open-air observatory on the 54th floor. However, once the Chrysler Building was completed two years later, the observatory closed. Moreover, the Chanin Building was the original transmission site for WQXR-FM, from 1941 until 1965, when it moved to the Empire State Building.

In 1978 it was awarded a New York City Landmark designation and was added to the National Register of Historic Places in 1980. Currently it is owned by Stahl Real Estate and managed by Cushman & Wakefield, and asking rents in 2019 were roughly on par with Midtown Manhattan’s $87 per-square-foot average.

Totalling 334,000 square feet over 40 stories at 595 Madison Ave., the Fuller Building is another notable Art Deco landmark in the city, designed by Walker & Gillette. Built in 1929, it originally served as the headquarters of the Fuller Construction Co., which relocated here from the Flatiron Building. The tower, designated a New York City Landmark in 1986, is clad in limestone with a pyramid-shaped roof.

A complete renovation was finalized in 2003 and included energy efficient features and recycling programs. Owned and managed by Vornado, the office layouts range from 2,000 to 13,600 square feet, and the asking price was around $87 per square foot in 2019.

One Wall Street, also known as the Bank of New York Building, has been housing office tenants for decades. However, the owner of the 34-story Art Deco tower at 48 Wall Street, a joint venture led by Macklowe Properties, has decided to convert it into condominiums. This 1928-built property designed by Ralph Walker of Voorhees, Gmelin & Walker served as the global headquarters of the Bank of New York Mellon Corp. until 2014, and will welcome its first residents by the end of the year.