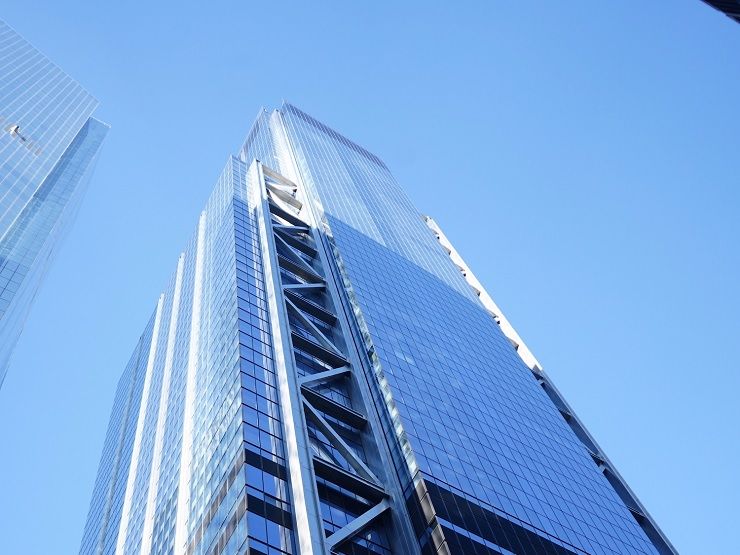 The glass-clad office tower rising today at 175 Greenwich Street, also known as 3 World Trade Center, was completed in 2018 as part of the redevelopment of the WTC site. It boasts a striking design envisioned by architects at Rogers Stirk Harbour + Partners.

3 World Trade Center originally consisted of the 22-story Marriott World Trade Center, which was heavily damaged in the 9/11 attacks. The hotel was ultimately demolished to make way for the construction of the National September 11 Memorial and Museum.

Construction on the new 3 World Trade Center building began in 2010, but was delayed due to disputes between developer Silverstein Properties and the land owner, the Port Authority of New York and New Jersey. After Silverstein snagged GroupM as anchor tenant, construction resumed and the tower opened in June 2018.

3 WTC incorporates roughly 1.6 million square feet of usable office space, with floor plates ranging in size from 30,000 to nearly 70,000 square feet. Amenities at the Silverstein-owned building include a column-free structure that allows for customizable layouts, floor-to-ceiling windows, a 5,000-square-foot terrace on the 17th floor, and direct in-building access to 12 subway lines and retail via the building lobby.

Getting to and from 3 World Trade Center

The office tower dubbed 3 World Trade Center is conveniently located in the heart of Lower Manhattan, close to a plethora of dining and retail destinations. Those working in the building have direct access to the new WTC Transportation Hub, which serves 12 New York City Subway lines.

Who is renting office space at 3 World Trade Center?

How much is the rent price for office space at 3 WTC?