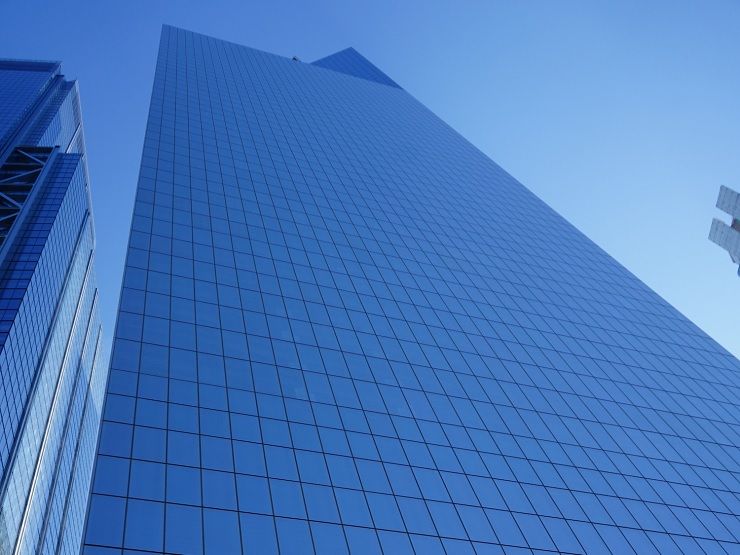 The glossy office tower rising at 150 Greenwich Street, on the site of the original 4 World Trade Center building, was completed in 2013. Designed by Fumihiko Maki, the tower broke ground in 2008, and took the place of the nine-story office building that stood there before it. The original 4 WTC was damaged by the collapse of the South Tower during the 9/11 attacks, and the site was razed to make way for new construction. Today, the tower houses the headquarters of the Port Authority of New York & New Jersey, as well as several high-profile tenants in industries like media and financial services.

The Silverstein-owned building offers amenities such as a 46-foot-high office lobby, floor-to-ceiling windows, colum-free corners and 80-foot perimeter column spans, 24/7 security, turnstile and ID card access system, and security cameras throughout. 4 WTC boasts elevators supplied by Schindler, which are reportedly the second-fastest in North America, at 9 m/s. The building has also earned LEED Gold certification for its sustainable features from the USGBC.

Getting to and from 4 World Trade Center

4 World Trade Center is located in the heart of Lower Manhattan, in the World Trade Center business neighborhood. The building connects to the PATH’s World Trade Center station and the NYC Subway WTC Cortland station via an underground retail and transport concourse, as well as to the new WTC Transportation Hub and the MTA Fulton Transit Center. Those working in the building have access to subway lines, ferries, water taxis and bus lines.

Who is renting office space at 4 World Trade Center?

How much is the rent price for office space at 4 World Trade Center?

Office asking rents at 4 World Trade Center hover around $80 per square foot, but can go even higher, depending on the lease terms. The state-of-the-art building offers Class A, energy efficient office space, and rents in this category tend to come at a premium, especially in established business neighborhoods. Still, rents in the World Trade Center area are slightly more affordable than submarkets in Midtown Manhattan, such as Hudson Yards or the Plaza District.