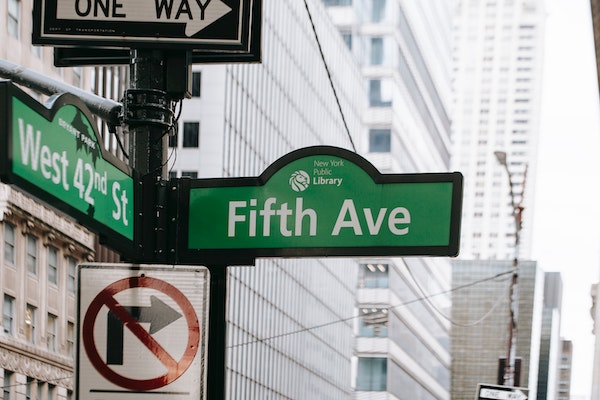 For a few years, Fifth Avenue held the title of the world’s most expensive shopping street, surpassing the busy streets of London or Paris. In 2018, however, it lost that title to Hong Kong’s Causeway Bay. According to a Cushman & Wakefield 2019 report, Causeway Bay was the priciest main street in the world, at $2,745 per square foot per year, while Fifth Avenue followed close, at $2,250 per square foot per year. Of course, these numbers have changed dramatically in the past two years, with rents dropping dramatically across the globe, but the appeal of these luxury shopping corridors has not waned. While retail rents in areas like Times Square have fallen to the lowest levels in a decade, key metrics like sales, hotel occupancy, and tourism numbers are on the rise, signaling positive change, according to recent CBRE research.

Three years into the pandemic, Manhattan’s retail market is currently undergoing an exciting shift. After a difficult couple of years of seeing many retailers close shop, vacant storefronts are starting to fill slowly again. Retailers are making the best out of a unique opportunity to snag Class A retail space at an excellent price. Many businesses were priced out of Midtown Manhattan pre-pandemic, as ground-level retail space with exposure on Fifth Avenue or Madison Avenue boasted some of the highest rents in the world. Now, landlords are a lot more open to concessions and rent reductions, in an effort to fill vacant spaces left empty during the past two years. This presents a unique window for small businesses to move in and benefit from the unrivaled foot traffic and exposure on Manhattan’s most prestigious retail corridors.

4 of the most desirable streets in Manhattan for retailers

Right now, Manhattan commercial real estate is a tenant’s market, and many retailers are grabbing the opportunity to open new locations in the borough. Some of the most sought-after locations for retailers are in Midtown Manhattan, as this submarket provides street-level exposure, heavy foot traffic, and plenty of walk-in opportunities.

Retailers choosing to set up shop in these areas also have access to some of the wealthiest customer bases in the city. The median household income in Midtown Manhattan in 2019 was $122,300 (73% more than the citywide number), while the median household income in the Financial District was 134% higher than the citywide numbers, at $164,860. Retail rents have gone down across the city, and landlords are offering much more flexible terms, so this is the best time for businesses to rent prime retail space in the heart of Manhattan.

The busiest commercial corridor in Midtown Manhattan, Madison Avenue, runs from Madison Square to the Harlem River Drive at 142nd Street. It is commonly associated with the American advertising industry boom of the 1920s when numerous agencies established their office headquarters in the area. Notable architectural and historical landmarks along Madison Avenue include St. Patrick’s Cathedral, the Met Life Tower, the Emmett Building, the New York Life Building, the Fuller Building, the Joseph Raphael De Lamar House, and Waldo House.

The benefits and advantages of operating retail space on Madison Avenue are manifold. Part of  Madison Avenue runs through the area between 57th and 72nd Street, an area also known as the Gold Coast. This part of Manhattan, housing the 10065 and 10021 zip codes, is one of the wealthiest in the country. Retailers setting up shop in this area benefit from constant foot traffic from residents living in the neighborhood, so they will face little volatility concerning office closures and reopenings.

Madison Avenue is one of the most sought-after destinations for high-end retailers, and some of the top fashion designers have presences here. Burberry, Hermes, Celine, Cartier, Barneys New York, Ralph Lauren, Gucci, Dolce & Gabbana, Tom Ford, Prada, Vera Vang, Rolex, and Coach are some brands operating in the area. Rents for retail space on Madison Avenue are significantly more affordable in 2022 than pre-pandemic, and various spaces are available for rent. The current situation offers a once-in-a-lifetime opportunity for tenants looking to lock in low 2022 rents for the long term.

Fifth Avenue is well-known worldwide for its towering office skyscrapers, architectural landmarks, and, last but not least, ultra-luxurious shops and restaurants. It stretches north from Washington Square Park to West 143rd Street and attracts millions of shoppers and visitors every year. Some of the most notable landmarks located along Fifth Avenue include the Lord & Taylor Building, Rockefeller Center, The Plaza Hotel, Bergdorf Goodman, the Tiffany Building, St. Patrick’s Cathedral, Saks Fifth Avenue Building, The Empire State Building, and the Flatiron Building. It also features various museums, including the Solomon R. Guggenheim Museum and The Metropolitan Museum of Art.

The Upper Fifth Avenue stretch, between 49th and 60th Streets, is the second-priciest retail corridor in the world, per the latest 2019 Cushman & Wakefield ranking. It’s one of the most desirable locations for local businesses and international brands. Pre-pandemic, retail rents here rested at $2,250 per square foot per year, which means smaller companies were priced out of leasing space.

Major retailers include Bergdorf Goodman, Tiffany, Saks Fifth Avenue, Urban Outfitters, Prada, Gucci, Versace, Dior, Louis Vuitton, Van Cleef & Arpels, Cartier, Apple, Balenciaga, Chanel, and many, many more. Fifth Avenue is a magnet for luxury brands and upscale restaurants, and any space that hits the market gets filled in record time. However, things have changed slightly in the past two years. Many retailers have downsized their physical footprint or closed down their shops, focusing on delivery pickup options or online stores. One example is Starbucks, which permanently closed 44 of its 235 Manhattan locations since early 2020. Instead, the Seattle-based company is opening new pickup locations in different parts of the city, catering to on-the-go customers. This phenomenon bodes well for smaller businesses with a better chance of snagging premier retail space on luxurious corridors such as Fifth Avenue at a much better price than pre-pandemic.

Park Avenue runs parallel to Madison Avenue and Lexington Avenue, stretching from Astor Place in Cooper Square to Third Avenue in Fordham. The portion between 14th and 17th Streets is known as Union Square East, while the stretch between 17th and 32nd Streets is dubbed Park Avenue South. The avenue is home to numerous architectural landmarks and iconic structures, including the Waldorf Astoria, the MetLife Building, the Helmsley Building, Lever House, Grand Central Terminal, the Seagram Building, and St. Bartholomew’s Episcopal Church.

Retailers renting commercial retail space along Park Avenue include Amazon Go, Stefano Ricci, Bath & Body Works, Rothman’s, Furla, Duane Reade, Anthropologie, Starbucks, Cellini, Apple, Herman Miller, and more. Before the pandemic, storefront space on Park Avenue cost as much as $4,000 per square foot, and competition was intense. Rental rates are a lot more flexible in 2022, and landlords are open to negotiations, making it an ideal time to enter this buzzing retail market.

Wall Street lies at the heart of the Financial District, a business-driven, fast-paced neighborhood that’s one of the most appealing destinations in the country for young professionals. A big part of the foot traffic along Wall Street is driven by businesses, which is why restaurants, delis, and coffee shops thrive here. However, there are also many young lawyers and financial advisors who choose to live close to the courthouses and financial institutions. According to Niche.com, 74% percent of residents in FiDi are renters, and only 26% are homeowners.

The median household income in the Financial District was $164,860 in 2019, 134% higher than the citywide median income. This is why luxury brands such as Tiffany’s and Hermes operate in the neighborhood and why you’ll find various upscale restaurants and business lunch options along Wall Street and the surrounding area. The presence of numerous financial institutions and government entities near Wall Street is an incentive for retailers looking to lease a space long-term. Foot traffic is constant, and walk-in opportunities are guaranteed, particularly during the workweek.

Are you thinking of setting up your business in a convenient location in Manhattan? Are you looking to lease space in a modern building offering state-of-the-art amenities? To learn about available office or retail space, call Metro Manhattan Office Space at (212) 444-2241 or email us at [email protected]