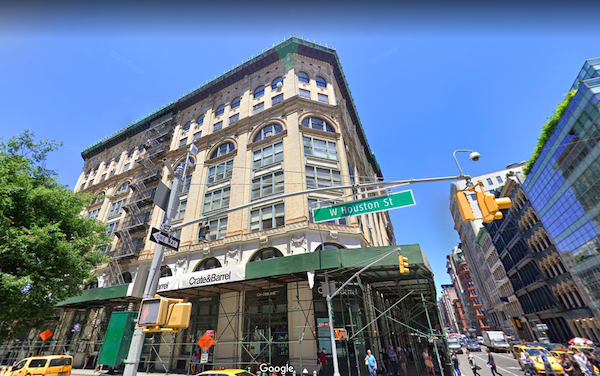 The stunning Beaux-Arts building rising at 611 Broadway, at the northwest corner with Houston Street in Midtown South, was completed back in 1892. It was designed by McKim, Mead & White for the Broadway Cable Railroad Company, and originally served as the headquarters and powerhouse for the Metropolitan Traction Company. It is the only McKim, Mead & White building located in the NoHo Historic District.

The New York Railways Company sold the building in 1925, after which it was home to various small manufacturers and garment makers. In the early 1980s, it was converted back to office space and completely renovated. Nowadays, The Cable Building is home to several creative office tenants, while the ground floor is home to Crate & Barrel and the Angelika Film Center and Cafe.

The Cable Building occupies a full block and has alternate addresses of 2-18 West Houston Street and 178-188 Mercer Street. The building features 200,000 square feet of Class B Greenwich Village office space, as well as 45,000 square feet of retail space on the first and second floors. The 10-story property has been owned and managed by M.D. Carlisle Realty since 1985, and was renovated in the 1980s and 2002. Amenities include 24/7 access, a doorman, high ceilings, tenant-controlled air conditioning, renovated marble bathrooms, and more. Many of the spaces at 611 Broadway feature hardwood floors and Venetian marble walls.

Getting to and from 611 Broadway

The Cable Building at 611 Broadway offers tenants an excellent location in the heart of the NoHo Historic District. The building provides easy access to a plethora of shopping, dining and leisure destinations in both NoHo and Greenwich Village. What’s more, those working in the building have direct access to the iconic Angelika Film Center on the ground floor. There are plenty of public transportation options nearby, accessible via the Broadway-Lafayette Street Station and the Bleecker Street Station.

Who is renting office space at 611 Broadway?

The Cable Building is currently home to various office tenants in creative industries like media and advertising, technology, fashion and architecture. Among those occupying office space at 611 Broadway are Ellen Jacobs Associates, Tonic Group, Breaking Media, GreenRoom, and BWArchitects. The ground floor houses a Crate & Barrel furniture store and the Angelika Film Center on the opposite corner.

How much is the rent price for office space at 611 Broadway?

Office asking rents at 611 Broadway start somewhere around $60 per square foot, which is considerably more affordable than the average commanded in Midtown South. Class B office space is significantly cheaper than Class A space, but 611 Broadway still offers all the modern features that office tenants look for nowadays. Given its location and flexible floor plates, the building is an ideal option for startups or small or midsize businesses in creative industries.