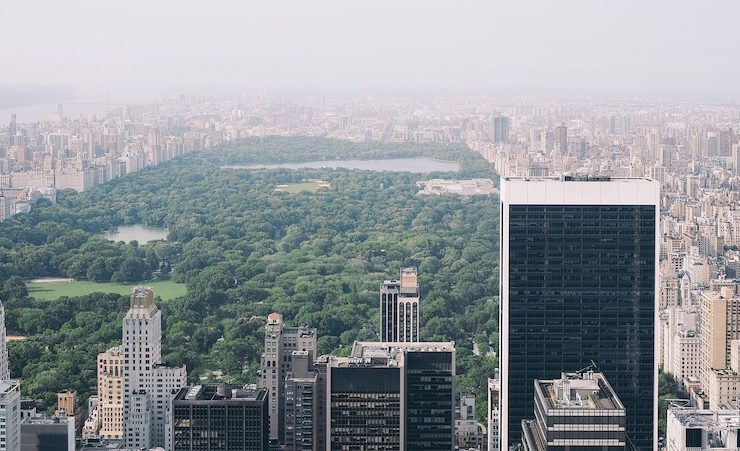 LEED, or Leadership in Energy and Environmental Design, is the most widely used green building rating system in the world. Property owners choose to invest in having their buildings certified not only because it benefits the society, but also because such investment impacts occupants’ health and productivity, as well as the costs of operations and maintenance. In addition, the instant recognition they receive boosts lease rates and resale values, and enhances their company’s brand.

New York City is no stranger to sustainable development, and its skyline boasts some of the most energy efficient office towers in the world. The former Conde Nast Building at 4 Times Square is actually considered the first green high-rise in the U.S., while One Bryant Park was the first commercial building in the country to earn LEED Platinum certification.

If you’re interested in doing business in an environmentally-friendly property, check out our selection of 10 of the greenest office buildings in NYC below, and contact our brokers for more information on available spaces:

The 46-story tower located at 300 West 57th Street near Columbus Circle was designed by architect Norman Foster, and had its landmark six-story base originally built by William Randolph Hearst in 1928. The development was the first building in the city to receive a LEED Gold certification for high environmental performance, both for its exterior (core and shell) and interior fit-out systems, in 2006. In 2012, Hearst Tower was awarded the Platinum level for Existing Buildings, and in 2016 it’s been recertified with a score of 80 out of 110 points.

The energy efficiencies built in the skyscraper and regular evaluation of energy saving measures over the years helped reduce its total energy consumption by 40 percent, placing it in the top 10 percent of efficient commercial office buildings in the country. Furthermore, Hearst reduced total waste going to landfills by 82 percent, and the tower became the first in NYC to adopt an extensive composting program. Water usage was reduced by more than 30 percent annually, as the property controls water usage throughout the building and uses 100 percent of reclaimed non-drinkable rainwater for hardscape/sidewalk cleaning. All its major HVAC systems were re-commissioned to identify and address any opportunities for improvement.

The 55-story tower at 111 Avenue of the Americas was developed by The Durst Organization and designed by COOKFOX Architects. The nearly 2.4 million-square-foot Class A office building is the first commercial high-rise in the U.S. to earn LEED Platinum certification (2010) using an array of advanced technologies designed to increase its energy efficiency and sustainability features. These include a clean-burning, 5MW cogeneration plant that provides about 65 percent of its annual electricity requirements, while lowering daytime peak demand by 30 percent. A thermal ice storage system further reduces peak load by producing ice at night, which is melted during the day to provide cooling. Rain and snow are captured and reused as gray water for toilets and to supply the cooling towers. Combined with low-flow fixtures, these measures save approximately 7.7 million gallons of potable water per year.

The Midtown Manhattan asset flaunts a street-level Urban Garden Room at 43rd Street and Avenue of the Americas that serves as an indoor extension of Bryant Park and Grace Plaza, a mid-block pedestrian passage/performance space, as well as the first green Broadway theater, the LEED Gold-certified Stephen Sondheim Theater.

A Related Companies. and Oxford Properties Group asset located at the northwest corner of 30th Street and 10th Avenue, the 1.8 million-square-foot tower was designed by architects Kohn Pedersen Fox Associates and stands 895 feet tall. The 10 Hudson Yards development is the first New York commercial building to receive LEED Platinum certification under the new v2009 rating system, with a score of 82 points.

Features that brought it the distinction include 1.2 megawatts of gas-fired micro turbines that generate power and hot and chilled water, twice as efficient as traditional systems. The Hudson Yards tower also has installed a 60,000-gallon stormwater retention tank that harvests rainwater for irrigating the property’s terrace landscaping, as well as 100 percent raised flooring, which enables improved temperature control and cleaner air.

The 102-story office building at 350 Fifth Avenue was built in 1931 and in 2011 it underwent significant renovations that materialized into a LEED Gold for Existing Buildings certification. The retrofit reduced the tower’s energy consumption by more than 38 percent, which translates into savings of $4.4 million in energy costs annually and a reduction in carbon emissions of about 105,000 metric tons over 15 years. Moreover, also in 2011, Chairman & CEO of The Empire State Building, Anthony Malkin, agreed to buy carbon offsets totaling 55 million kilowatt hours per year of renewable energy, turning the iconic asset carbon-neutral.

To achieve LEED Gold, the 2.8 million-square-foot Midtown Manhattan skyscraper was upgraded to include: ultra low-flow fixtures in the building’s restrooms; green cleaning supplies and pest control products; recycling of tenant waste and construction debris; use of recycled paper products; use of recycled content carpets; low off-gassing wall coverings, paints and adhesives; and a tenant engagement program including submetering, a tenant energy management system and mandatory green requirements in lease agreements.

The trophy tower has a 3,500-square-foot pre-built space on the 42nd floor that has been certified Platinum under LEED for Commercial Interiors.

The tallest building in the western hemisphere, owned by the Port Authority of New York and New Jersey, received its LEED Gold certification in 2006. The 104-story Downtown Manhattan tower at 285 Fulton Street is enveloped in a glass curtain wall going from the 20th floor to the observation deck. The glass is coated to allow natural light to reach more than 90 percent of the building’s office areas and reduce artificial lighting. One World Trade Center uses a building management system comprising thousands of sensors throughout the structure, designed to optimize energy use and indoor air quality.

Stormwater run-off is captured and stored in three retention tanks and is used for cooling and irrigation, reducing the building’s water usage by 41 percent, while also using off-site renewable wind and hydro power. More than 40 percent of the materials used in construction were recycled, including gypsum boards, ceiling tiles and glass. Also, more than 87 percent of construction waste from the project was diverted from landfill.

Workers commuting to the World Trade Center have access to mass transit service from the new complex—new climate-controlled corridors connect the Freedom Tower to The World Trade Center Transportation Hub and the new PATH terminal, 11 NYC Transit subway lines and the new Fulton Street Transit Center, the World Financial Center and ferry terminal, underground parking and retail and dining facilities. In addition, the 2001 attacks materialized in a series of life-safety systems, including exit stairs, communication antennae, exhaust and ventilation shafts and elevators (which produce energy through regenerative braking), encased in a concrete core that is 2 feet thick.

Completed by The Durst Organization in 1998, the 48-story tower at 151 West 42nd Street was the country’s first environment-friendly, large-scale green construction project. Its success as the first green high-rise in the U.S. is said to have indirectly led to the creation of the USGBC LEED rating system that same year. A recent $140 million capital improvement program has materialized into a new entrance and lobby, new amenity floor, base building upgrades and energy efficient technological enhancements.

The One Five One building uses eco-friendly gas-fired absorption chillers that are coupled with a high-performing insulating and shading curtain wall, lowering the need for heating or cooling for most of the year. In addition, an air delivery system provides twice as much clean air as is required by the city building code, and recycling chutes serve the entire building. Renewable wind power is purchased to offset 100 percent of the building’s electricity use. Furthermore, the Plaza District building uses EPA WaterSense-labeled plumbing fixtures to promote high performance and water efficiency. Tenants are part of a recycling program and organics collection program for composting, and benefit from green roofs and exclusive outdoor terraces.

The 52-story tower at 242 West 41st Street in Times Square, designed by Renzo Piano Building Workshop and FXFOWLE Architects, was completed in 2007 after three years under development. Even though it doesn’t hold a LEED building certification, it boasts a range of sustainable features that earn it a high rank among New York City’s green developments. Consequently, the building attracts office-using tenants looking for quality space, the latest addition to the tenant roster being U.K.-based firm Tag.

One notable feature is the double-skin curtain wall: it comprises floor-to-ceiling glass that maximizes light and views for people inside and outside the building, and horizontal white ceramic rods on the building facade, which act both as an aesthetic veil and a sun shade. The rods, which change color with the sun and weather, are glazed with a finish similar to the material used on terracotta to reflect light, self-clean and resist weather. Additionally, the automated louver shades move in response to the position of the sun and inputs from the sensors, blocking light to reduce glare or allowing it to enter at times of less direct sunlight.

The moveable shades cut down energy consumption by about 13 percent, by reducing solar heat gain by 30 percent. Combined with a dimmable lighting system that enables each room’s lights to brighten or dim depending on whether it’s occupied and how bright the sun is, these measures help cut the building’s energy costs.

Located at 250 Greenwich Street, the 52-story 7 World Trade Center was completed in 2006 as part of the rebirth of Lower Manhattan following the 2001 attacks. The 1.7 million-square-foot Class A office building earned LEED Gold for three of its components, and LEED Platinum for its top three floors leased by German WestLB Bank. It was designed by renowned Chicago architecture firm Skidmore, Owings & Merrill, which will move its New York headquarters to 7 WTC in 2020.

Sustainable features include the use of recycled structural steel, insulation and interior materials, as well as a high-efficiency air filtration system. The development uses less energy by using collected rainwater to cool the building and by directly metering tenants. In addition, 15,000 square feet of open park space is available for tenants, neighbors and visitors.

Developed by Boston Properties in 2004 with a roughly $650 million budget, the 47-story office building occupies a full city block and is located at 7 Times Square, between 41st and 42nd streets and between Broadway and Seventh Avenue. It was designed by David Childs of Skidmore, Owings & Merrill, and currently houses various high-profile tenants, including law firm Norris McLaughlin, which recently leased up 27,488 square feet.

The Class A Midtown Manhattan office tower totals nearly 1.3 million square feet and it recertified its LEED Gold award for Operations and Maintenance in May 2019 with a score of 69 points: 10 for human experience, 12 for transportation, 5 for water use reduction, 4 for waste management and 28 for energy efficient design and performance. The skyscraper also holds an Energy Star certification for almost every year since 2008.

The five-building office enclave at 200 Vesey Street, 230 Vesey Street, 250 Vesey Street, 200 Liberty Street and 225 Liberty Street in Downtown Manhattan was designed by the late architect Cesar Pelli in the 1980s and built by Olympia and York; the project was completed in 1988. Its centerpiece is the Winter Garden atrium, a privately-owned public space flanked by restaurants and retail space that has remained unchanged since the space opened in 1988. It was destroyed in the 2001 attacks and rebuilt in 2002.

The massive 4.8 million-square-foot Brookfield Place development was acquired by Canadian company Brookfield Properties in 2014, and the news owner subjected it to consistent upgrades that earned it a LEED Gold recertification for Operations and Maintenance in 2018.