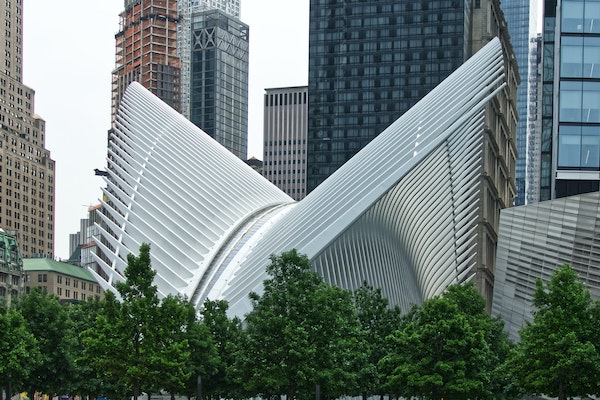 It’s easy to think of iconic and aesthetically revolutionary buildings like the Empire State Building, the Chrysler Building, or the Flatiron Building when you think of New York City.

Moreover, it’s just as easy to think of glistening modern and instantly recognizable trophy skyscrapers like One World Trade Center, 425 Park, or the Bank of America Tower.

Known as “The Big Apple,” “The City That Never Sleeps,” and many other monikers, New York City is truly in a class of its own. Whether or not you’re approaching from the Jersey Turnpike or landing at one of the airports, the sheer sight of New York City’s skyline immediately makes an impact.

New York City has pioneered architecture and the concept of a skyscraper for two centuries. Today, it is a unique mix of classic historical buildings and modern glass-facade skyscrapers.

It is truly a sight to behold for commercial tenants, residents, and tourists.

As developers and architects look for innovative ways to build taller, better, and more sustainable towers, New York City continues staking its claim as an architectural trailblazer. Today, it possesses some of the world’s most unique and unusual buildings.

For your reading pleasure, here is a list of 5 of them.

The 60-story Jenga Building is a residential tower located in the heart of Tribeca on 56 Leonard Street. After completion in 2017, it is officially the tallest building in all of Tribeca, the second priciest neighborhood in all of Manhattan, and an area better known for its fashionable industrial/warehouse-style loft spaces than residential towers.

Hence, the Jenga Building and its unique stacked appearance stand out.

Swiss architects Herzog & de Meuron, who designed the building, describe it as ‘houses stacked in the sky.’

Justin Davidson, Architecture Critic for New York Magazine, also describes it as “The most alluring addition to the downtown skyline in decades.” Moreover, Curbed calls it “One of NYC’s 10 most important buildings of the past decade.”

If you’ve ever played Jenga, looking at this property might give you the impression that each floor is removable. But while the exterior can look deceivingly wobbly, the interior is pure luxury.

The Jenga Building is not the only unusual structure in Tribeca. Walking along Thomas Street, you can see a menacing, windowless skyscraper described as “made for machines, not people.” This building is the AT&T Long Lines Building.

Located at 33 Thomas Street and completed in 1974, the property is a classic example of Brutalist architecture. Designed by John Carl Warnecke, 33 Thomas Street is a telephone exchange/wire center building that also houses a state-of-the-art data center.

There also could be more than meets the eye with this mysterious building. It is considered one of the country’s most secure properties and can survive nuclear fallout. Furthermore, an investigation by The Intercept suggests that it houses an NSA mass surveillance hub codenamed TITANPOINTE.

Coincidentally (or not), the Long Lines Building is located next door to the FBI’s field office. Do what you like and think what you want with this information.

Hearst is one of the largest media and communications companies in the world. However, it might be just as known for the uniqueness of its global headquarters, a unique architectural gem in the heart of Midtown Manhattan.

The fact that the Hearst Tower is one of the most unusual buildings in New York City says a lot. Especially considering it sits in Manhattan’s central hub, its largest and most prominent office market, and blocks away from the Empire State Building and the Chrysler Building.

Everyone from startups looking for a budget, side street loft to hedge funds seeking space in a white glove Plaza District Building to international law firms make Midtown their home. But Hearst did it here since 1928 upon completion of the original, six-story Hearst Magazine Building.

In 2006, Hearst Corp. and Tishman Speyer developed a 46-story tower that stands above the original building today.

Designed by renowned architect Norman Foster, the Hearst Tower includes 856,000 square feet of top-class Manhattan office space and is one of the greenest buildings in the city.

With an eye-catching triangle-shaped facade, the building is one of the most recognizable structures in the U.S. It even won the 2006 Emporis Skyscraper Award and the British Construction Industry Award in 2007.

The Oculus Transportation Hub is by far one of the city’s most visually striking and innovative structures. Perhaps, even in the country.

Designed by Santiago Calatrava, the $4 billion Oculus Hub is the most expensive train station in the world. It opened to the public in 2016 and today serves as the central station for the WTC Transportation Hub in the heart of Lower Manhattan. Lower Manhattan is one of the safest and fastest-growing submarkets in all of New York City.

Calatrava carefully designed The Oculus to honor the legacy and history of the former World Trade Center site. He built it in alignment with the sun’s solar angles so that each September 11 at 8:46 AM, when the first plane struck WTC, until 10:28, when the second tower collapsed, a light beam illuminates the Oculus floor through the structure’s central skylight.

Hence, it shouldn’t be surprising that Calatrava’s work on Oculus took 14 years to complete.

For the last property on our list of the five most unusual buildings in New York City, we head to the East Village in Lower Manhattan, towards the Cooper Union campus. Here we find an unusual structure designed by Thom Maybe of Morphosis, dubbed 41 Cooper Square.

The nine-story, 175,000-square-foot building is home to the Albert Nerken School of Engineering. It sits on the former School of Art Abram Hewitt Building site.

Construction on this unusual structure began in 2006 and immediately met controversy due to its aggressive design.

However, critics thought differently. Nicolai Ouroussoff of the New York Times described the building as ‘an example of how to create powerful architecture that is not afraid to engage its urban surroundings.’

New York City continues to be a one-of-a-kind and unique city where the old truly meets the new. Its skyline is a beautiful combination of old landmarks and modern skyscrapers. However, New York City is more than its uncanny skyline. If you venture into the city, you’ll run into some of the world’s most uncanny properties. The above list of the five most unusual buildings in New York City is only a sample.

Are you considering setting up your business in a convenient location in Manhattan? Are you looking to lease space in a modern building offering state-of-the-art amenities? If so, consider working with a commercial broker as soon as possible. They can help point you in the right direction, especially if you want to lease office space in a unique New York City building.