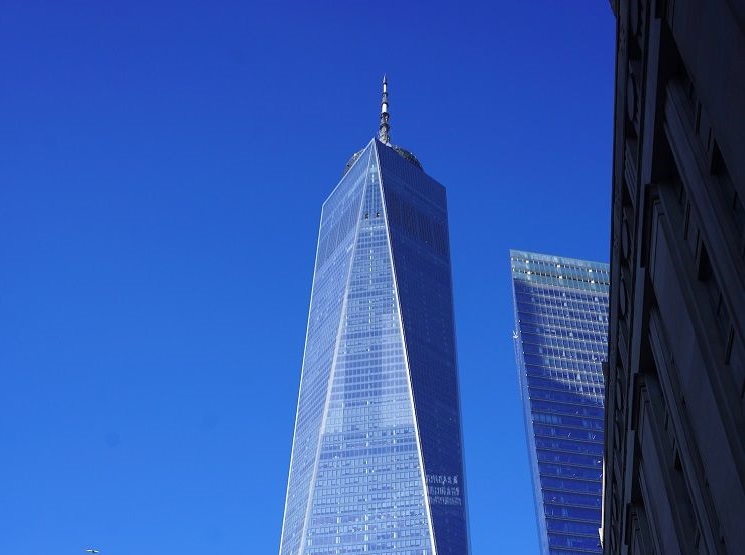 The 104-story One World Trade Center rose on the site of the original 6 WTC in 2014, when it became the tallest building in the U.S. and the Western Hemisphere. Part of the World Trade Center redevelopment program, the glass-clad tower at 285 Fulton Street was designed by David Childs of Skidmore, Owings & Merrill, the same architect who designed the Willis Tower and the Burj Khalifa.

The first tenant to move into the 3.1 million-square-foot office tower was Conde Nast, which moved its headquarters from Times Square in November 2014. The development of the One World Trade Center reportedly led to the transformation of the World Trade Center submarket from a financial services cluster to a tech, retail and luxury living hub.

The tower is owned by The Port Authority of New York and New Jersey, and is managed by The Durst Organization.

The 104-story skyscraper features floor-to-ceiling windows offering panoramic views of the city, and column-free, core-to-window office space for businesses of all sizes. One World Trade Center offers pre-built options ranging from 5,000 to 25,000 square feet, as well as large-block spaces ranging from 30,000 to 500,000 square feet of office space.

Getting to and from One World Trade Center

One WTC is conveniently located in the bustling World Trade Center submarket, home to a plethora of businesses in the legal sector, financial services, technology and other industries. To the south lies the National September 11 Memorial & Museum, to the north lies 7 World Trade Center, and to the west is Brookfield Place.

Immediately to the east of 1 WTC is the new World Trade Center Transportation Hub, which includes the Oculus, designed by Santiago Calatrava. The transit hub opened in 2016 and connects the PATH service to the New York City Subway system, offering easy access to all of Lower Manhattan, from the Fulton Center to the Battery Park City Ferry Terminal.

Who is renting office space at One World Trade Center?

Publishing and media giant Conde Nast was the very first tenant to move into the One World Trade Center, in late 2014. Soon enough, various high-profile companies joined the tower’s tenant roster, including Servcorp, Value Works, Cushman & Wakefield, Moody’s, Ameriprise, CBS, Pret a Manger, BounceX and Asapp. The original WTC site was a hotbed for companies in the financial sector, however, the redevelopment project has attracted tenants from a larger variety of industries, including tech, media, advertising, architecture and fashion.

How much is the rent price for office space at One World Trade Center?

Office rents at One World Trade Center tend to be on par with the Lower Manhattan average, which rests at roughly $75 per square foot for Class A office space. The tower’s excellent location and unparalleled views and amenities, coupled with the easy access to various public transport options, luxury retail and dining options, make 1 WTC a highly appealing destination for companies looking for a top-notch NYC business address.