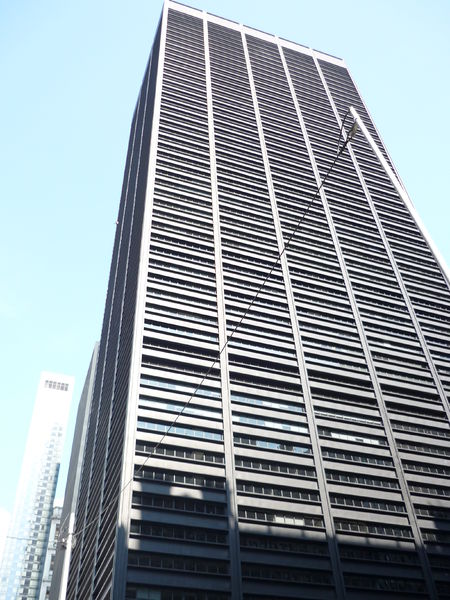 The dark tower rising at 165 Broadway in Lower Manhattan was originally built in 1973 for the U.S. Steel Corporation. It was designed by Roy Allen of Skidmore, Owings & Merrill at the site of the former Singer Building, and it’s today known as One Liberty Plaza.

The tower is located close to the World Trade Center site, and its facade was damaged during the 9/11 attacks. The building, currently owned by Brookfield Properties and Blackstone, was renovated after the attacks in 2002. It currently houses various companies in industries like finance, law, banking and media.

Getting to and from One Liberty Plaza

The building is conveniently located near several major subway lines, including the A, C, J, Z, 2, 3, 4, and 5 trains, as well as ferry service from Battery Park City. It also offers direct access to the Fulton Street Transit Center and the World Trade Center Transportation Hub.

Who is renting office space at One Liberty Plaza?

One Liberty Plaza is one of the biggest office buildings in the city, and throughout the years has attracted numerous high-profile corporations, due to its convenient location in the World Financial Center business district. The tower used to house the headquarters of Merrill Lynch, and today is home to various office-using tenants in finance, law, media and publishing. Notable tenants on the building’s roster include Cambridge University Press, Wells Fargo, NASDAQ, Empire BlueCross BlueShiels, Aon, NKF, Business Insider, Goldman Sachs, and the New York City Economic Development Corporation.

How much is the rent price for office space at One Liberty Plaza?

Office asking rents at One Liberty Plaza are roughly on par with the average found in the World Trade Center submarket of Lower Manhattan, which rests at roughly $75 per square foot for Class A space. The submarket accounts for a quarter of Lower Manhattan’s office space inventory, and many of the newer buildings within it are still under lease-up.