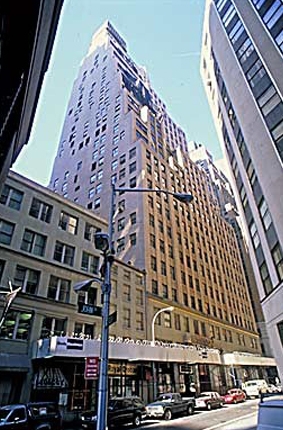 The office building at 90 John Street in Lower Manhattan was built in 1932 and designed by Clinton & Russell, Springsteen & Goldhammer. In the late 1990s, the building was part of the ‘Plug ‘n Go’ program, an effort by The Downtown Alliance and the Economic Development Corp. to lure technology firms to Lower Manhattan. The program offered below-market, pre-wired startup office space on short-term leases, in an attempt to create a new ‘Information Technology District.’ The program resulted in nearly 100 leases totaling more than 440,000 square feet in the first year, including leases at 90 John Street. Many of the tech tenants still call the mixed-use tower home, and leases at 90 John are still eligible for various real estate incentive programs.

The 29-story building at 90 John Street offers more than 190,000 square feet of rentable Class B office space, as well as over 32,000 square feet of retail. The mixed-use Financial District tower houses office and retail tenants on the lower floors, and also residential space on the upper portion of the building.

90 John Street was renovated in 2008, and now features a renovated lobby, 24/7 building access, onsite management, an in-house parking garage, and a freight entrance on Platt Street. Other amenities include a doorman, in-building laundry, a roof deck and a fitness center.

The office space boasts high ceilings and floor plates ranging from 17,916 to 34,030 square feet. The tower is owned and managed by Moinian Group.

Getting to and from 90 John Street

90 John Street benefits from an excellent location in the prestigious Financial District of Lower Manhattan, just a few blocks from the South Street Seaport. The building is convenient to most major subway lines, including the 2, 3, 4, 5, A, C, J, M, and Z trains, as well as to the Staten Island Ferry.

Who is renting office space at 90 John Street?

How much is the rent price for office space at 90 John Street?

Office rents at 90 John Street remain slightly more affordable than the Lower Manhattan average, which reached $62 per square foot in the first months of 2019. Rents at the mixed-use FiDi tower hover around $50 per square foot, and tenants can also benefit from incentives like the Community Renewal Program or the Relocation Assistance Program.