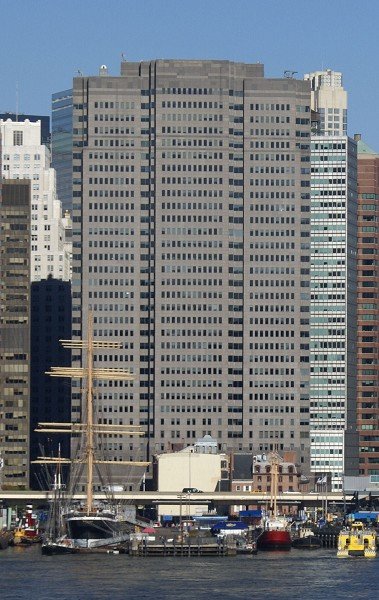 The massive office building at 199 Water Street in Manhattan’s Financial District was built in 1984 and is a recognizable staple on the Lower Manhattan skyline. The building was designed by Swanke Hayden Connell Architects and features two distinct granite facades meant to suit the different historic districts of the South Street Seaport to the East and Downtown Manhattan to the West. Currently owned by Jack Resnick & Sons, the building, also known as One Seaport Plaza, was renovated in 2013 and features modern office space and a plethora of amenities.

Getting to and from One Seaport Plaza

Located along the East River, south of the Brooklyn Bridge and near the South Street Seaport,

One Seaport Plaza is convenient to a variety of transportation options, including the J, Z, 2 and 3 trains, and also offers access to water taxis and the heliport. Furthermore, the World Trade Center complex and the Fulton Transit Hub are just steps away.

Who is renting office space at One Seaport Plaza?

How much is the rent price for office space at One Seaport Plaza?

Office asking rents at One Seaport Plaza tend to be roughly on par with the average found in the Financial District, which hovers around the $57 per square foot mark. Office rents are significantly more affordable in Lower Manhattan compared to Midtown submarkets, which has led many businesses to relocate to this part of the island, which historically has been home to corporations in financial services and law.