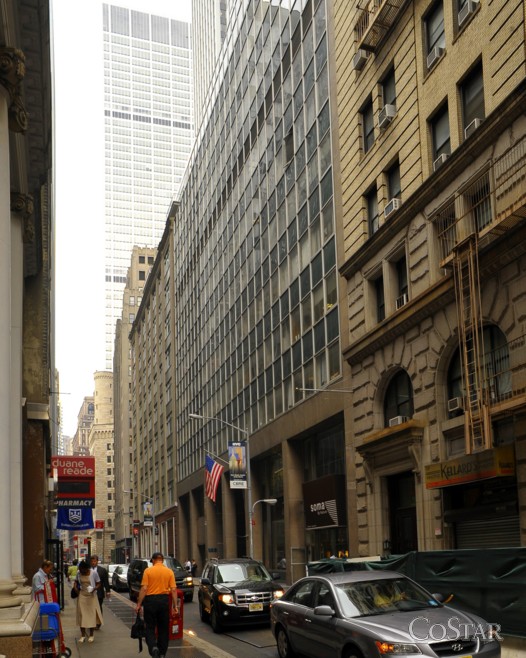 The office building located at 123 William Street in Lower Manhattan was completed in 1957 with a design by Emery Roth & Sons. It was renovated in 2014 and today, it houses various office tenants in industries like finance, government, and media. The Financial District asset benefits from a strategic location in the heart of Lower Manhattan, close to shopping, dining and public transportation options nearby.

The building at 123 William Street incorporates 525,642 rentable square feet of FiDi office space, as well as 14,876 square feet of retail space. Owned and managed by AR Global, the building was renovated in 2014, and its 27 stories were brought to modern standards. The 27-story property offers amenities such as on-site management, USPS drop-off, 24/7 access, free parking, concierge, food court and restaurants on site.

Getting to and from 123 William Street

123 William Street benefits from an excellent location in the Financial District, close to several transportation options. It offers direct access to the A, C, E, J, Z, 2, 3, 4, 5, and 6 subway lines, and lies in close proximity to the Fulton Street Transit Center, the Calatrava PATH Station, Brookfield Place and the World Trade Center, and the redeveloped South Street Seaport.

Who is renting office space at 123 William Street?

The office building at 123 William Street is conveniently located in the prestigious Financial District, where all the major corporations operate their businesses. Notable tenants in the building include Kaplan & Schultz, Knotel, Bisnow Media, Shareablee, Fundera, the U.S. Social Security Administration, and Cooper Robertson.

How much is the rent price for office space at 123 William Street?

Office asking rents at 123 William Street tend to be roughly on par, or slightly below, the average commanded in Lower Manhattan, which hovers around $62 per square foot in 2019. The good location, coupled with the direct access to the New York City Subway and the variety of dining and retail options nearby, make 123 William a coveted business address for office tenants.