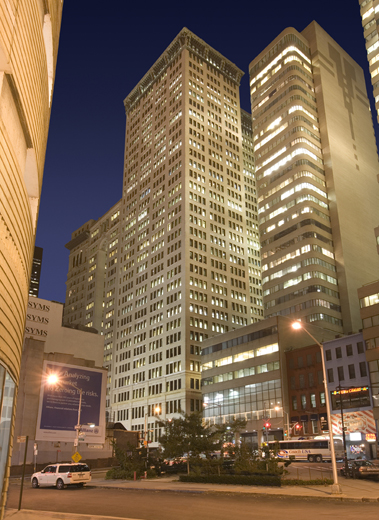 The office building at 61 Broadway in Lower Manhattan was built in 1916, with a design by Francis H. Kimball of Chicago-based Skidmore, Owings & Merrill. The Art Deco building lies on the northwest corner of Broadway and Exchange Alley in the Financial District, and stretches east-west to Trinity Place. Under the leadership of RXR Realty, the building underwent an extensive renovation effort in 2018 that brought it to modern standards and further upgraded its amenities. Nowadays, the tower is home to various companies in fields like law and finance.

61 Broadway incorporates 750,000 square feet of Class A Financial District office space across 40 stories, with a typical floor size of 24,000 square feet. The building underwent renovations in 1988, as well as in 2018, and features upgraded elevators, HVAC and sprinkler systems, renovated bathrooms, corridors and a revamped lobby.

Getting to and from 61 Broadway

The office building at 61 Broadway lies in close proximity to several major subway lines, including the 1, 2, 3, 4, 5, J, N, R, and Z trains. Additionally, the tower offers easy access to the WTC Transportation Hub, Fulton Center, and the Staten Island Ferry.

Who is renting office space at 61 Broadway?

How much is the rent price for office space at 61 Broadway?

Office asking rents at 61 Broadway hover around $80 per square foot, slightly above the Lower Manhattan average due to its excellent location and state-of-the-art, modern amenities. Still, the Financial District is currently more affordable than the fast-growing Hudson Yards and the Plaza District in Midtown Manhattan, where office rents often surpass $100 per square foot.