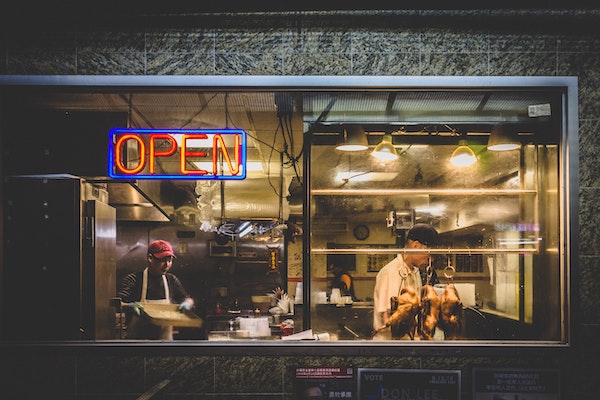 The city’s once-bustling restaurant scene has changed dramatically in the past year, with numerous establishments closing their doors, either temporarily or permanently. This phenomenon has led to many of NYC’s buzzing streets empty and landlords struggling to fill vacant ground-floor spaces.

Now, New York City restaurants have reopened at 50% capacity, marking the first step on the road to recovery for the industry. With asking rents significantly lower than they were a year ago, and with vaccination efforts accelerating, opportunities in this sector abound, and NYC’s restaurant scene might be on track for a resurgence.

As lockdowns and restrictions were put in place last spring, NYC restaurants were left eerily empty. Some restaurant owners took to the digital world and added a home delivery feature; others struggled to pay rent and keep the bills paid. Small establishments and independent restaurants, which make up more than two-thirds of the U.S.’s restaurant industry, bore the brunt of the impact. According to Crain’s, 90% of last year’s closures happened among these smaller restaurant chains. What’s more, The Real Deal cited data from a New York City Hospitality Alliance survey that showed that 92% of local restaurants couldn’t afford to pay rent in December 2020.

The result of the events of 2020 has led to a significant, almost record-breaking drop in asking rents for restaurant spaces. It’s no news that New York City, and particularly Manhattan, has traditionally boasted some of the highest commercial real estate rents in the world. Office spaces in Midtown and Downtown Manhattan often command more than $100 per square foot, while retail rents in the city vary from $100 to more than $2,000 per square foot. Factor in utilities, labor, and other additional costs, and the total monthly cost to rent commercial space in Manhattan rises even further.

One year after the pandemic, “no one is asking for the kind of rents they did in 2019.” This is what Spencer Rubin, a restaurant owner in Midtown Manhattan, told The City in a recent piece. The article also cites data from CBRE showing that the average asking rent for restaurant space has fallen 10% year-over-year to $652 per square foot – the lowest level since 2011. What’s more, the number of ground-floor retail spaces available for lease directly from landlords in Manhattan is now above 250, 25% higher than it was a year ago. These numbers might seem bleak, but they also open new opportunities for tenants in the restaurant industry, as this sector begins to pick up steam again.

As coronavirus-related restrictions placed pressure on retail tenants in NYC, landlords were faced with two options: either release their current tenants, be left with a vacant space, or offer concessions until things go back to normal. According to Crain’s, landlords offer more accommodations than ever when it comes to retail tenants, and the past year has given rise to a bundle of pro-restaurant measures. These include periods of free rent, percentage-only rent, suspension of personal liability guarantees and leases, and even a moratorium on commercial evictions. The city also created the Open Streets: Restaurants program, which allows restaurants to expand their outdoor dining space onto sidewalks, roads, and even parking lots. More than 10,000 restaurants have enrolled so far, and the program was made permanent in the fall.

Managing partner at SCG Retail, David Firestein, told the Commercial Observer that it’s probably only large national chains or fast-casual restaurants that are paying full rent right now in NYC. He explained that ‘the vast majority of landlords are working with their restaurant tenants: deferring or abating rent, or going to some kind of percentage or lower rent. Most of that’s being done for short periods of time, six months or a year, trying to keep people afloat until we come out of this.’ Firestein emphasizes that it’s not in a landlord’s best interest to drive tenants out of business, particularly when it comes to profit-making tenants pre-Covid.

Are restaurants finally ready for a comeback?

Despite the restrictions and trepidation over the coronavirus’s evolution, the restaurant sector in NYC is in a good place to start its recovery, according to experts. Landlords are more open than ever to making concessions and supporting tenants, asking rents have dropped significantly compared to 2019, vaccinations are underway, and there is plenty of vacant, move-in ready retail space available for lease.

According to Bloomberg, bars and restaurants across the U.S. added close to 300,000 jobs in February 2021. As a new round of federal funds is unlocked and vaccination efforts continue to progress, experts predict a wave of demand for dining out over the following months, which in turn will trigger a wave of new restaurant openings in NYC. Dozens of new restaurants, cafes, and breweries are already popping up across the five boroughs, as restaurateurs take advantage of the low asking rents to grab move-in ready retail space. Construction and build-out costs for restaurants are high, ranging anywhere from $95,000 to $2 million, according to Upserve. Consequently, the option of leasing a finished restaurant with equipped kitchens, seating, ventilation, storage, and so on is a unique opportunity.

What’s more, while many New Yorkers are taking the safest route and eating at home, Millennials are reportedly keener on fine dining than ever, and they’re fueling indoor dining in NYC. Business Insider reports that Millennials are shelling out for high-priced items like steak, wine, tasting menus, and that average tips have also increased in the past year. This spells nothing but good news for the restaurant industry and is a sign that despite restrictions, demand for dining out in NYC is high, and the sector is finally on the road to recovery. It will most likely be a slow recovery, but a recovery nonetheless.