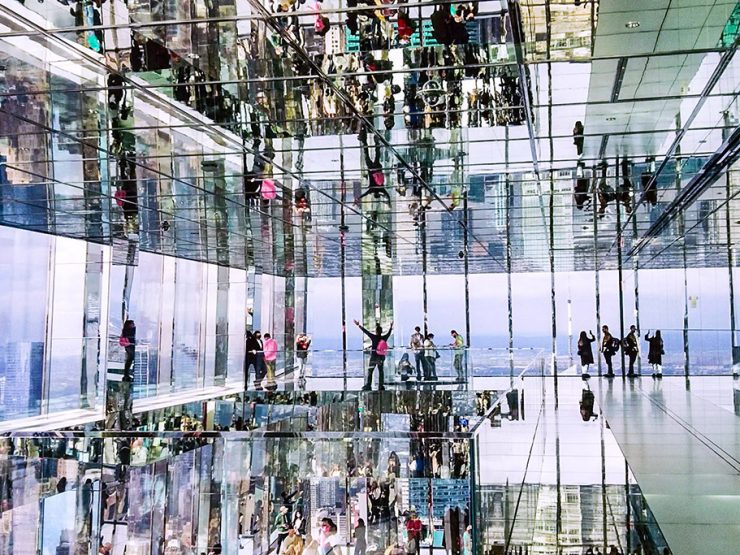 One Vanderbilt’s observation deck, the Summit, opened recently, and it is getting a lot of favorable press. Why all the excitement? Aren’t there plenty of tall buildings with observation decks in New York City already?

The Summit is no ordinary observations deck. Located on the 91st through the 93rd floor of One Vanderbilt near Grand Central Terminal, this space feels more like an art installation than an observation deck. That’s because the landlord SL Green and their designers, “Snøhetta” and “Kenzo Digital,” have created a sensory experience.

Visitors at One Vanderbilt take an elevator that goes up along the side of the building, with mechanical noises playing over speakers the whole way up.

When you reach the 91st floor, you enter a corridor of orange light. This leads you to a room with mirrored ceilings and floors, a space that feels infinite. That is just the first of several breathtaking, mind-bending attractions. Later, you will find yourself in a room of metallic bubbles created by the well-known sculptor “Yayoi Kusama.”

Finally, there are the glass ledges, where visitors can stand for the sensation of floating a thousand feet above the city.

After such a sensory rush, you might need a drink. That can be found at “Après.” This is a high-altitude cocktail bar and café from Danny Meyer, the “restauranteur” behind Eleven Madison Park, Blue Smoke, and Shake Shack.

Who Are the Commercial Landlords Behind this Vision?

SL Green is the largest commercial landlord in New York City. They are a real estate investment trust, or REIT, owning and operating 43 properties in New York. SL Green holds interests in 76 buildings total. The company began operations in 1980.

Other significant properties in SL Green’s portfolio include The Graybar Building on top of Grand Central Terminal, the Met Life Tower in the Flatiron District, 125 Park Avenue, and 461 Fifth Avenue, both in The Grand Central submarket.

I mentioned SL Green in a July 2020 video, where I noted the potential of the company’s stock. Back then, it was trading for less than $50/share. Now it is listed at $73. This increase, I believe, reflects how professionally run this REIT is. It manages a portfolio of trophy Class-A buildings occupied by top-notch tenants. Investing in this company has proved to be a great call.

Even with SL Green’s uniformly strong portfolio, One Vanderbilt is a significant achievement.

One Vanderbilt-Demand Driven by Scarcity of Modern Office Space

The 42nd Street property opened in September 2020 after years of wrangling around zoning and many construction delays. The supertall tower stands 1,401 feet tall. It is the city’s fourth-tallest skyscraper by roof height.

When One Vanderbilt hit the market at the height of the pandemic, the conventional wisdom was that no one wanted office space in Manhattan. Despite that, the building is 91% leased. That is a stellar accomplishment.

Why was the demand for this building so strong at a time of high vacancy rates?

The demand for office space at One Vanderbilt is driven by a lack of modern Class A office space in Midtown East and significant demand for this type of space from large companies.

The tenants at One Vanderbilt include major financial firms like TD Bank and the Carlyle Group. The building also hosts white-shoe law firms like “Greenberg Traurig” and “McDermott Will & Emery.”

It is also the home of “Daniel Boulud’s” “Le Pavilion,” a seafood-focused restaurant where you can enjoy a world-class meal of wood-fired octopus or “Dover sole.”

One Vanderbilt is one of Manhattan’s greenest skyscrapers. It comprises 90% recycled material and is set to become fully LEED-certified.

Most Desirable Class A Building Near Grand Central Terminal

Considering how quickly SL Green leased it, it’s safe to say that One Vanderbilt is perhaps the most desirable Class-A building near Grand Central.

Corporate tenants have always liked the commercial office buildings around this area because of the easy access to rail, subway, and bus service.

Commuters can get off Metro-North from Connecticut, get off the Lexington Avenue subway line and get direct tunnel access to The Graybar Building, The Chrysler Building, and One Grand Central Place, among others, and now, of course, One Vanderbilt Place. You can take the train into Manhattan, walk through the gorgeous Grand Central Station, and thru a short tunnel to your office, without the need to go outside.

You can understand why the Grand Central submarket has a strong potential for redevelopment.

Indeed, a supertall mixed-use building is set to rise on the other side of Grand Central at the site of the former Hyatt Hotel.  This structure was originally the Commodore Hotel, built-in 1919. In the late 1970s, Donald Trump purchased the property in his first Manhattan real estate deal. He gutted the historic building and wrapped it in the glass façade we see today.

Until more Class-A properties rise in Midtown East, large tenants seeking modern amenities will need to look elsewhere. Many of them will probably end up in Hudson Yards or the World Trade Center.

The Value of an Observation Deck

The Summit should generate substantial revenue for SL Green, especially when the office market is so unpredictable.

For comparison, the observatory at The Empire State Building’s observatory yielded $60 million in profits in 2010. In the wake of the 2008 financial collapse, commercial properties were still reeling from a global economic downturn. That was an astonishing profit on a relatively small amount of square footage.

Throughout Manhattan, many observatories have opened in the last 15 years and hosted steady crowds. These include popular tourist destinations like Top of the Rock, One World Observatory, and The Edge at Hudson Yards. The Chrysler Building is currently working toward opening its observation deck.

I believe the Summit could prove a significant earner for SL Green. Between the elevator tickets, admission, and cocktails, you can easily spend $80 on one visit.