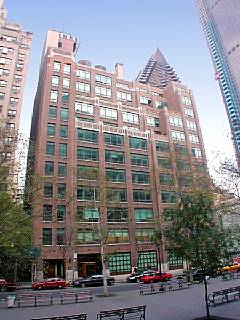 The office building at 305 East 47th Street in the United Nations submarket of Midtown Manhattan was built back in 1928. It is also known as 3 Dag Hammarskjold Plaza, and offers commercial office condominiums for rent and for sale on the east side of Midtown, in a convenient location close to various public transportation options. The building is home to various consulates and permanent missions of the UN, and is also popular among medical office tenants.

305 East 47th Street was originally built in 1928 and was renovated in 1987. It features 128,000 square feet of Class B United Nations office space across 12 floors, divided into 25 privately owned office condominiums. The building boasts a design by Frank S. Parker, and is currently managed by Colliers International.

Getting to and from 305 East 47th Street

Those working within 305 East 47th Street have convenient access to various public transportation options, including the F.D.R., Queensboro Bridge and Grand Central Terminal, served by the 4, 5, 6, and 7 lines, as well as Amtrak and MetroNorth.

Who is renting office space at 305 East 47th Street?

How much is the rent price for office space at 305 East 47th Street?

Office asking rents at 305 East 47th Street tend to be roughly on par with the Midtown Manhattan average, which reached a post-recession peak of $88 per square foot in 2019.

Rents in the UN submarket are often lower than the average, as most of the international organizations in this area sign long-term leases and are part of a select niche of tenants in this part of NYC.