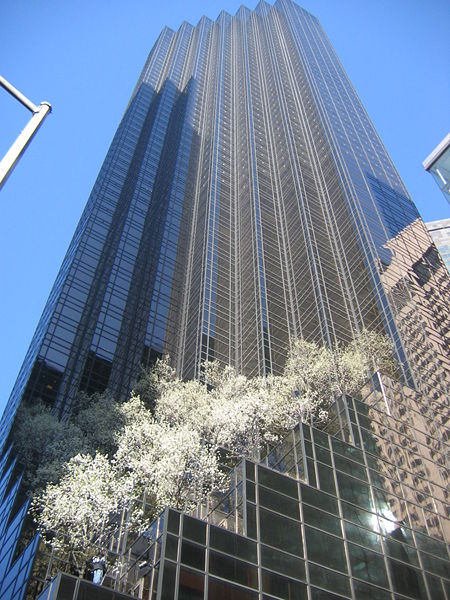 The visually striking tower at 725 Fifth Avenue in Midtown Manhattan was designed by Der Scutt, Swanke Hayden Connell & Partners and completed in 1983. The Trump Tower, as it is called, rises 58 stories and houses the headquarters of The Trump Organization, office space for lease, a large atrium space with high-end retail, and luxury apartments on the upper floors.

Occupying a prominent Fifth Avenue address just south of Central Park, the Trump Tower sits on a plot of land that once housed the Bonwit Teller flagship store. The office floors of the building house various high-profile tenants in industries like banking, finance and business management. The tower also houses the campaign headquarters for Donald Trump’s 2020 presidential election.

The Trump Tower at 725 Fifth Avenue incorporates roughly 257,000 square feet of mixed-use commercial space, 130,000 of which is dedicated to office space. The Plaza District office building include some 125,000 square feet of retail space on the lower levels, and separately owned and operated residential condominiums on floors 31 through 58. The tower features office space on floors 14 through 26.

725 Fifth Avenue also features four dining establishments within the building, namely Trump Bar, Trump’s Ice Cream Parlor, Trump Cafe, and Trump Grill. The main entrance to the Trump Tower is located on Fifth Avenue, with a side entrance exclusive to residents on 56th Street. The NBC television show, The Apprentice, was filmed in the building’s fifth-floor studio.

Getting to and from Trump Tower

The office building at 725 Fifth Avenue is conveniently located in the heart of the Plaza District, close to all the high-end shopping and dining destinations in Midtown Manhattan. Those working in the building have easy access to several subway stations that service the N, Q, R, F, E, and M trains.

Who is renting office space at Trump Tower?

How much is the rent price for office space at Trump Tower?

Office asking rents at Trump Tower are roughly on par with the average commanded in Midtown Manhattan, which hovers around $88 per square foot in 2019. This area of Manhattan is the priciest, and most coveted business district in New York City, with the Plaza District and Hudson Yards submarkets commanding the highest prices.