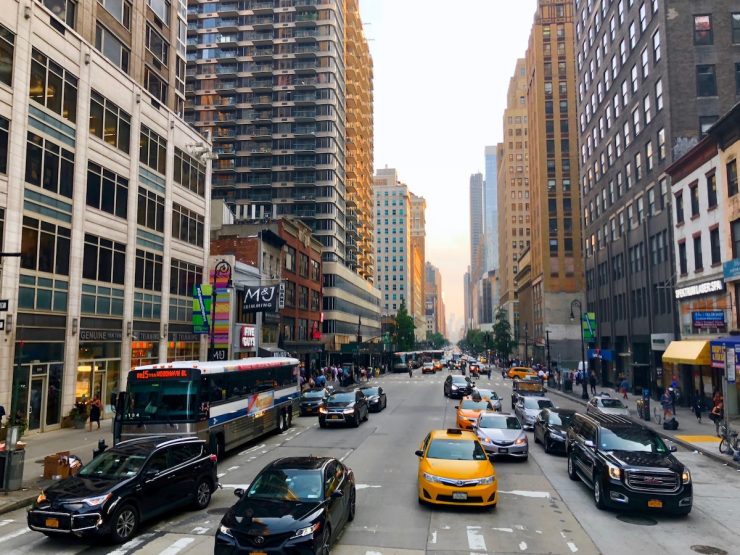 Although the Covid19 pandemic has heavily hit New York City, local authorities have made significant progress on major infrastructure projects. The year started strong with the January opening of the $1.6 billion Moynihan Train Hall at Pennsylvania Station. Located within the historic Farley Post Office building, the 255,000-square-foot expansion marks a significant milestone in Midtown Manhattan‘s public transport infrastructure revamps. But the state-of-the-art Moynihan Train Hall is just one piece of the puzzle.

The opening of the new train hall, named after late Senator Patrick Moynihan, is part of a larger, $51 billion plan to redevelop Midtown West. The masterplan includes redeveloping and expanding Penn Station, connecting the High Line to Moynihan Train Hall, adding affordable housing to the area, expanding the Javits Center, and last but not least, replacing the Port Authority Bus Terminal. This last item on the list will prove one of the most challenging projects Governor Cuomo has ever undertaken.

A few weeks ago, Governor Andrew Cuomo announced that the Port Authority Bus Terminal redevelopment at 625 Eighth Avenue is finally ready to become a reality. The project, which will cost somewhere between $7.5 and $10 billion and take ten years to complete, will have a massive impact on Midtown West and all the travelers coming in out of Manhattan.

The Port Authority Bus Terminal, also known as PABT, is the largest in the Western Hemisphere and the busiest in the world by traffic volume. Before the pandemic hit NYC, the terminal saw more than 225,000 people daily and more than 65 million people per year. It’s one of three bus terminals operated by the Port Authority of New York and New Jersey, besides the Journal Square Transportation Center in Jersey City and the George Washington Bridge Bus Station in Upper Manhattan.

The terminal is notorious among New Yorkers and out-of-towners alike due to its crumbling infrastructure, outdated amenities, and constant congestion. Since the 1980s, PABT has been working at full capacity, unable to accommodate the heavy influx of travelers from Manhattan. To make matters worse, PABT does not allow for layover parking, which means buses have to use local streets, leading to even worse traffic congestion in Midtown West.

The Port Authority of New York and New Jersey has been trying to come up with a viable solution for over ten years, yet all attempts have been unsuccessful – until now. It would seem that the PANYNJ has finally come up with a solution, which entails razing the existing structure and replacing it with a state-of-the-art new terminal without taking it out of service.

The ambitious plan presented by Gov. Cuomo during his 2021 State of the State Address includes:

When work is finished on the project, somewhere in 2030, PABT will be renamed the Midtown Bus Terminal and forever change the Midtown West landscape. The bigger, $51 billion Midtown West redevelopment plan will bring 196,000 new jobs to the area and create much-needed affordable housing and outdoor space to this part of the city.

What’s next for Cuomo’s $51B Midtown West redevelopment plan?

The next steps in Cuomo’s master plan include fueling $16 billion into Penn Station’s reconstruction, which involves expanding the complex to 40% more train capacity and adding more than eight new underground train tracks. This phase of the project is expected to create 60,000 direct jobs. Afterward, up to 14 new buildings from Broadway to the Hudson will yield 20 million square feet of commercial and residential development and 1,400 affordable housing units.

NYC’s $51 billion plan also includes a new Waterfront Park at Pier 76, transforming the NYPD car tow pound into a 5.6-acre public space on the Hudson River waterfront. Finally, Cuomo plans to direct $1.5 billion towards a 1.2 million-square-foot expansion of the Jacob K. Javits Center, which will increase its capacity by 50%. At the moment, the Javits Center is the busiest convention center in the U.S.