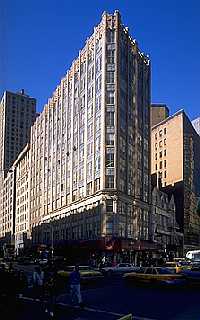 The office and retail building at 1841 Broadway near Columbus Circle was designed by B.H. & C.N. Whinstin, and completed in 1924. Once known as the Cova Building, the Midtown Manhattan tower owned by Global Holdings will be replaced in the near future with a brand-new structure. The owner plans to build a new tower, designed by Gloria Glas of SLCE Architects, to feature 181,319 square feet of mixed-use space. Plans call for 160,000 square feet of residential space, and a small portion dedicated to commercial space. Currently, the building houses office-using tenants and a Starbucks restaurant.

The building rising at 1841 Broadway offers 120,000 square feet of Class B Columbus Circle office space across 12 stories. It was renovated in 1958 and 2014, and incorporates roughly 9,000 square feet of retail space. Amenities include 24/7 tenant access and security and easy access to public transportation. Building owner Global Holdings plans to replace the existing vintage office building with a new tower that will house mostly residential condominiums.

Getting to and from 1841 Broadway

The office building at 1841 Broadway is conveniently located near Columbus Circle, offering access to the 1 and 2 subway lines served by the 59th Street Station. The building also lies in close proximity to the Mandarin Oriental and the Time Warner Center, connecting tenants to various shopping, dining and leisure destinations.

Who is renting office space at 1841 Broadway?

How much is the rent price for office space at 1841 Broadway?

Office asking rents at 1841 Broadway are roughly on par with the average commanded in Midtown Manhattan, which hovers above $80 per square foot. Class B properties are slightly more affordable than their Class A counterparts, but still offer a lot of the modern amenities that companies look for nowadays. However, given that the building is scheduled to be demolished and replaced by a residential tower, office space at 1841 Broadway might no longer be available for lease.