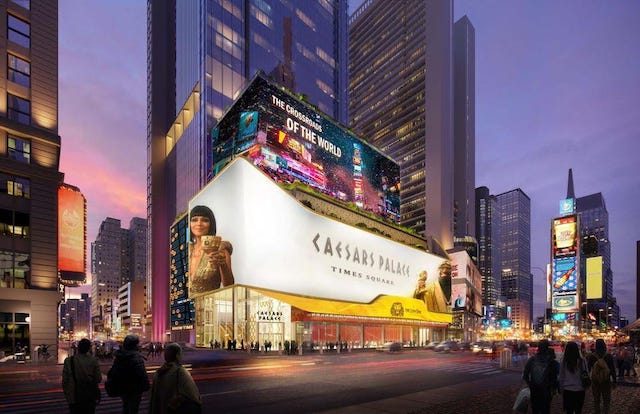 By the start of next year, this figure could top 50%.

Yet there are questions and doubts. Perhaps remote and hybrid work genuinely is the new normal. This may be where occupancy rates peak and stay for the foreseeable future. There’s also a chance office space demand never recovers to pre-pandemic levels.

New York City Comptroller Brad Lander seemed to admit as such in a December 13, 2022 note. “Office occupancy and commuting numbers have held steady for several months, suggesting that we may be settling into a new normal.”

However, landlords have anticipated this scenario for over a year and are pivoting strategies.

One way is predictably converting office spaces into residential units.

However, this is hardly the most eye-catching or city-altering strategy that landlords are taking.

With one final state casino license up for grabs, landlords once focused on office buildings are “hedging their bets” or “gambling” on profiting from a future of tepid office space demand.

They are teaming up with Vegas casino operators and, in some cases, rappers like Jay-Z to submit multi-billion-dollar bids.

The result could bring a casino to Times Square and change the city’s landscape forever.

As the future of New York City’s office market hangs in the balance, let’s dive deeper into both of these trends and see why landlords are pivoting.

One of the report’s top goals? Turning empty offices into residential units.

Many see Lower Manhattan’s post-9/11 recovery after the city and the state changed zoning laws as a model. In the last 20+ years, Lower Manhattan tripled its population. Moreover, One Wall Street was one of the first office towers to be converted to residential post-pandemic and one of the city’s largest-ever office-to-housing conversions.

However, this trend has occurred beyond Lower Manhattan and long before the release of Making New York Work For Everyone.

A December 2021 study by REBNY also found that 10% of the older office buildings in Midtown Manhattan could be turned into residential space, creating 14,000 new apartment units in the area.

The Largest Landlords Are Going All In

New York City’s largest landlord SL Green is also getting involved. Not only is it heavily lobbying city and state officials to ease restrictions in converting New York City office space into apartments. It also describes office-to-residential conversions as “one of the most important topics that we will be championing over the coming months and years.” It’s clearly acting on this quote in 2023. It plans to sell its stake in multiple office properties to raise over $2.4 billion.

Until May 2018, Nevada was the only state with legalized sportsbooks. Now, over 30 states offer some form of legal betting. Thus, casinos are now a red-hot commercial real estate sector.

Although casinos have existed in the state of New York for some time, landlords are rushing to develop the next big casino and bring it to New York City. Especially with office space occupancy potentially plateauing and only one more downstate casino license available.

Thor Equities’ has a $3 billion bid with Saratoga Casino Holdings, Legends, and the Chickasaw Nation to develop a casino and entertainment complex in Coney Island.

But two other proposals make a titanic statement about the state of New York City office space and the pivot of landlords.

First, The Related Companies is partnering with Wynn Resorts on a bid for a casino in Hudson Yards. Related’s CEO Jeff Blau states that the casino complex will have 1,500 guest rooms, 20 dining options, a nightclub, and a theater.

However, the most shocking bid is SL Green’s proposal with Caesars. The bid, which Jay-Z recently joined, plans to redevelop 1515 Broadway and bring a casino to the heart of Times Square.

Remember- this is Manhattan’s largest landlord. Proposing a casino in the heart of Times Square speaks volumes about the commercial market’s state.

In addition, the proposal plans to invest in security, traffic, and mass transit. Accelerating the economic recovery of surrounding businesses and creating well-paid union jobs is also a priority. SL Green also says if this casino bid wins, it would benefit nearby restaurants and hotels.

Although the recovery of the post-pandemic New York City office market remains impressive, the reality is that we might be staring at our new normal. Office occupancy rates, while at post-pandemic highs, have remained largely stagnant over the past few months.

From occupancy rates as high as 95% pre-pandemic to cheering for occupancy rates around 50% speaks volumes. Adding further context to this is the relatively lower rate of subway riders. We’re at only 62% of pre-pandemic levels. But of course, that’s an entirely different conversation that doesn’t only involve remote work.

As a result of these shifts to what the new post-pandemic normal could look like, landlords aren’t going in with a doom and gloom outlook. They’re going in with a proactive strategy to pivot their strategies and find opportunities far beyond the office space.

It’s simple math for them. Commercial occupancies are lower, and landlords often struggle to lease large blocks of space at reasonable rents. At the same time, residential rents continue rising, and casino REITs are the lone property sector in positive territory in 2022, according to Hoya Capital.

2023 could see a recession and challenging times for office landlords. Therefore, there is no option but to think outside the box and adapt to real-time trends.

The shift to residential is one. However, a rush to bid for a casino in New York City is the real one to watch.