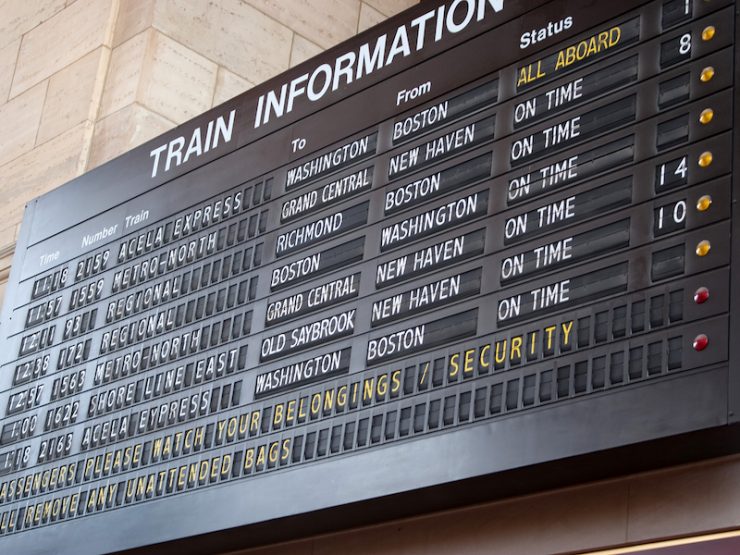 While the world continues to fixate on the Ukraine crisis and the pandemic, landlords, brokers, and businesses are closely following another story that may bring sweeping changes to the Manhattan real estate landscape. After fifteen years of construction worth $11 billion, a new Long Island Rail Road station beneath Grand Central Terminal is scheduled to open by the end of this year. The project includes the 350,000-square-foot commuter corridor as part of One Vanderbilt office tower and 25,000 square feet of brand-new retail space.

The new terminal will reduce the pressure on Penn Station, redirecting about half of the Long Island Rail Road commuters to Midtown East. Equipped with four new platforms and eight tracks, the new Grand Central station will save about 40 minutes of travel time to those who work in the area. The commuters traveling to the West Side will still be able to use the old station, but when tunnels are closed, Grand Central will provide a backup transportation option when tunnels at Penn Station are closed.  Long Island Rail Road currently has only half of its pre-pandemic ridership, but recent market research implies that ridership may soon increase. According to a recent CBRE report, malls already see more foot traffic than before COVID, and more workers are expected to return to offices in the upcoming months.

The opening of the new LIRR station at Grand Central may expedite this process, simultaneously bringing more of a Wall Street vibe to the area. According to the most recent S&P Global data, the vacancy rate in the Financial District is still high, nearly 18%, compared to 13% in the areas surrounding Grand Central. Since financial and law firms don’t need to maintain their physical presence in Lower Manhattan as much as they used to, they are likely to continue to relocate their offices to Midtown East.

The influx of formerly Downtown-based companies will further increase the appeal of commercial real estate in the area that already has many features to ensure employees’ satisfaction from their office experiences. In addition to numerous transit options and reasonable values for an inventory of Class A office space.

The area is evolving to offer an increasingly pleasant pedestrian experience. For years, it has been undergoing major renovations of public spaces funded by the Grand Central Partnership. Now, the infrastructure upgrades that were put on pause due to the pandemic are being resumed. A recent proposal is to redesign an 11-block corridor along Park Avenue from East 46th to East 57th street, incorporating more green space.

Grand Central attracts all kinds of businesses. This January, golf club fitter and retailer Club Champion rented over 5,000 square feet for its flagship store at 220 East 42nd Street. Russell Investments, a Seattle-based firm with over $300 billion worth of assets under management, signed a lease for a space at 575 Fifth Avenue, conveniently located near Grand Center Terminal. Filipino fast-food chain Jollibee, known for its crispy fried chicken, is moving into the area, too. It plans to open a new location near Grand Central by the end of the next year. The asking price for the Jollibee’s 10-year lease was $230 per square foot, while the pre-pandemic prices for retail spaces ranged between $100 to $1,000 per square foot. The final amounts of these transactions remain undisclosed, though.

But it is not unlikely that new tenants could negotiate decent deals. First, newer buildings are highly motivated to lease empty space, attracting remaining office tenants from nearby from older class A buildings and even tenants from class B buildings seeking a substantial upgrade. Companies have become cautious about signing new leases since the planned office return dates have changed at least twice. To induce tenants to sign new leases, landlords have responded by offering more free rent, increased build-out allowances, and reduced rent.

Still, as more people will return to in-person work, the new Long Island Railroad station at Grand Central will inevitably bring more foot traffic to retail spaces as well, which will increase demand and ultimately lead to higher retail rents.

Recovery, however, is spread unevenly between different types of properties. According to The Real Deal, the average age of commercial buildings in Manhattan is 68 years, with only one in 10 office properties built after 2000. Modern, amenity-rich, spacious buildings with bigger elevators and more efficient air-filtrating systems are rare. So it should come as no surprise that new class A offices and retail spaces see lower vacancy rates than older heavily mortgaged and undercapitalized class B and class C buildings. According to S&P Global, it’s about 30% of the total Manhattan office space, spread across many neighborhoods on both sides of the island.

While the current landscape encourages businesses to relocate to Midtown East, it doesn’t mean that Penn Station and the neighboring Garment District submarket have forever lost the battle for the hearts and dollars of business tenants. Despite a corresponding drop in demand, remaining on the West Side may be beneficial in the long run.

There is another, Penn Station-specific redevelopment project on the horizon. The plan includes 8 acres of public spaces, including a plaza the size of the Rockefeller Center. Former governor Cuomo proposed it. One of the project’s supporters is the real estate investment trust, Vornado. This prominent New York City landlord owns five sites near Penn Station. Opponents, however, say that redevelopment should prioritize affordable housing rather than favoring the construction of commercial office towers. So while it’s not entirely clear who will have the final say, one thing is certain: current Governor Hochul is definitely in favor of redevelopment. She dislikes the existing Penn Station so much that she once compared it to a haunted house.

Redevelopment of Penn Station to Take At Least a Decade

This proposed redevelopment of Penn Station will take at least a decade. There will be significant traffic and disruption during construction. This will likely slow down the recovery of the adjacent areas, such as the Garment District, even further. Some commercial landlords have responded by converting their office buildings around Bryant Park to condominiums for sale. Historically, there has been strong demand in New York City for commercial condos and coops. But they have always been in short supply, particularly smaller units. Newly proposed construction projects in the area also tend to include residential units like a recently announced 69-story mixed-use skyscraper on West 37th Street. But this is a typical pattern when it comes to redevelopment.

Not long ago on Second Avenue, we saw a similar drop in demand. While new stops of the Q train were under construction, some tenants moved out. But as the Q line extension became operational, interest in the area increased immediately.

Garment District and the area around Penn Station offer a variety of architecturally interesting commercial buildings. Affordable loft buildings with exposed ceilings, oversized windows, and concrete or hardwood floors can be easily found on side streets there. Avenues office buildings such as 450 Seventh Avenue and 1 Penn Plaza offer a high level of amenities. As landlords of Penn Station and Garment District buildings continue to deal with uncertainty, they may be incentivized to offer better deals. They may divide their larger vacant spaces to welcome smaller tenants or consider less traditional office uses such as healthcare or life science tenants. Both Penn Station and Garment District are connected with the PATH train that transports commuters from New Jersey to Manhattan. This has helped properties such as class A Nelson Tower at 450 Seventh Avenue or Vornado’s One Penn Plaza retain tenants. Since overall leasing activity continues to prioritize high-quality buildings near major transportation hubs, it is unlikely that class A buildings in Penn Station will fall out of favor.