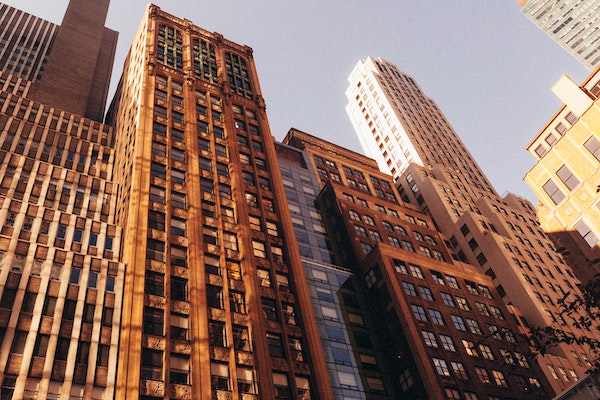 As remote and hybrid work models are becoming more and more popular, many of New York City’s skyscrapers are half-empty. A return to the office is underway, but many companies allow staff to work remotely indefinitely. Meanwhile, landlords are struggling to fill vacant spaces and retain existing tenants by offering never-before-seen concessions.

In light of these new developments, many have begun to question the role of trophy office buildings and towering skyscrapers. NYC’s skyline is instantly recognizable and a symbol of Manhattan’s position as one of the busiest business districts in the world. But as remote work gains traction, a business address on a prestigious Manhattan street isn’t as appealing anymore. Some experts are urging that vacant office buildings be converted to affordable housing or even hotels. Others are urging city officials and building owners to prioritize sustainability and make their buildings more energy-efficient as a means of enticing tenants and, of course, protecting the environment.

With its glistening, sky-piercing skyscrapers, that same iconic NYC skyline is causing some severe damage to the environment and, consequently, to people’s health. According to Green Biz, New York State consumes more fossil fuels in its residential and commercial real estate spaces than any other U.S. state. What’s more, research shows that pollution from fuel combustion in these buildings led to roughly 1,940 premature deaths and totaled $21.7 billion in health impacts in 2017.

Is there a way to make NYC’s office towers more energy-efficient?

Buildings account for approximately two-thirds of greenhouse gas emissions in New York. To mitigate this problem, environmental and advocacy groups, together with members of the City Council, launched a campaign this year to pass legislation that would ban fossil fuel hookups in new construction and gut renovations in NYC. According to the press release, a gas ban is expected to reduce air pollution and long-term health problems while creating clean energy jobs and paving the way for all-electric construction. Mayor Bill de Blasio announced his support for a ban on gas for construction and gut renovation projects by 2030.

However, fossil fuel emissions due to gas hookups in NYC buildings are just part of a bigger problem. Many of the city’s buildings are old and lack the modern energy-efficient features standard among new buildings. Many of these buildings still rely on gas hookups, window A.C. units, and small windows that lack thermal features for maximum energy efficiency. At the same time, retrofitting and gut renovation projects are expensive. With landlords already struggling to retain and attract tenants in the aftermath of the pandemic, such projects are not at the top of the priority list. However, a local law passed in 2019 doesn’t leave building owners much choice.

In November 2019, NYC passed Local Law 97, arguably the most ambitious law ever adopted by a U.S. city to reduce building emissions. Part of the Climate Mobilization Act, the law requires the largest 50,000 buildings in the city to reduce their carbon emissions by 40% by 2030 and by 80% by 2050.

These 50,000 NYC office buildings account for roughly 60% of the city’s floor area and its building emissions. To stay within limits imposed by the new law, building owners can deploy retrofitting projects, use renewable power sources, and even carbon trading. Owners who fail to keep building emissions under the designated cap face fines of $268 per ton of emissions. These fines could reach $5 million per building per year.

The Climate Mobilization Act authorizes property-assessed clean energy financing (PACE) in NYC to incentivize building owners. This way, they can use financing to make energy-efficient upgrades and pay back the PACE loan over the lifespan of the equipment purchased – roughly 20 years or more. The program is expected to create 689 green jobs and reduce 447,600 metric tons of CO2e from NYC’s atmosphere. Building owners will be able to finance up to 100% of retrofitting costs. The PACE program is open to commercial and multifamily buildings consisting of three units or more, including healthcare facilities, industrial, non-profit, religious, and tax-exempt properties.

111 Wall Street, the first NYC building to use PACE financing towards sustainability

Building owners are already starting to use PACE financing to make their properties more energy-efficient. In June, Mayor Bill de Blasio announced that 111 Wall Street received an $89 million PACE loan to retrofit 900,000 square feet of office space. According to a press release, the effort will save $2.5 million in annual energy costs and avoid $750,000 in Local Law 97 fines starting 2030.

The PACE financing package is part of a larger effort by Nightingale Properties and Wafra Capital to upgrade 111 Wall Street. The owners recently obtained $500 million in financing to undertake a significant renovation effort at the Lower Manhattan office building. Upgrades will include a new curtain wall, new floor-to-ceiling windows, a renovated lobby, intelligent building technology, and 40,000 square feet of amenities, including a new conference center, event space, a fitness center, and a bike and scooter charging room.

The property at 111 Wall Street used to be known as the Citibank Building and was previously fully leased to Citigroup. The property occupies an entire city block between Wall Street and Gouverneur Lane and has direct access to Wall Street/Pier 11, the Wall Street Heliport, and various subway trains. The building incorporates 1.2 million square feet of Class A Manhattan office space across 25 stories. Now, most of that office space will be retrofitted to ensure energy efficiency.