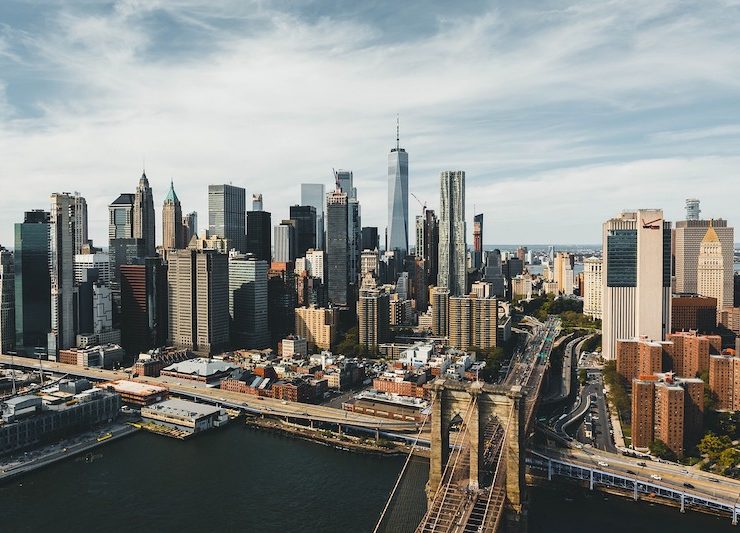 New York City is notoriously expensive, whether you’re looking at residential or commercial real estate. Homes and condos are selling for exorbitant prices, while Manhattan office space is among the priciest in the world. It’s not uncommon for landlords to ask potential tenants more than $100 per square foot in certain submarkets, such as FiDi, Hudson Yards, or the prestigious Plaza District. Commercial space in these coveted enclaves comes at a premium, but there are many who are willing to fork over any amount in exchange for a NYC business address.

Everything is more expensive in New York City, and that includes office space, retail space, industrial space, basically all property types are pricey in the city. On that note, we wanted to see which were the most expensive streets and neighborhoods for commercial space in New York City in 2019. We looked at all the commercial real estate sales to close in the five boroughs so far this year, to see which areas of the city are preferred by investors. We extracted the 30 most expensive streets, as well as the 30 most expensive neighborhoods in NYC, to get a better idea of what the market looks like this year. Our list includes streets and neighborhoods that recorded at least 10 commercial sales from January through October 2019. Keep reading to see our findings.

Manhattan’s Third Avenue Is the Priciest Commercial Street in NYC

When it comes to expensive streets in New York City, commercial buyers are unsurprisingly keen on Manhattan. Third Avenue was the show stealer this year, with 10 sales closed for a combined volume of $716 million, and a median sale price of $12 million. The largest deal to close here in 2019 was signed in the first month of the year, when the Chetrit Group paid $422 million to purchase the Midtown Manhattan building at 850 Third Avenue, from HNA Group. Another notable deal was 60 Guilders and RCG Longview’s $212.5 million purchase of the student housing building at 1760 Third Avenue, from The Chetrit Group. Meridian Investment Sales spearheaded the sale of the 19-story building, which used to be a nursing home and was renovated by Jacob Chetrit in 2017.

The second-priciest street in NYC in 2019 was Lexington Avenue, led by Savanna’s $180 million purchase of 360 Lexington Avenue from AEW Capital Management in late August. The second-largest deal to close on Lex was the $131 million sale of 1990 Lexington Avenue, in Central Harlem. The sale was part of a larger portfolio deal between buyers L+M Development Partners & Invesco Real Estate and Brookfield Properties, which parted ways with its Putnam portfolio of market-rate housing.

The most ‘affordable’ Manhattan street on our list is Broadway, at #27. Here, 21 commercial transactions closed during 2019, for a combined dollar volume of $477 million and a median sale price of $1.4 million. The top deal here was Paramount Group’s $130.5 million sale of the office asset at 670 Broadway, to German company Cara Investment GMBH.

Brooklyn’s Flatbush Avenue is the 4th Priciest Street in NYC

The Brooklyn office market is thriving in 2019; even though the borough tends to attract smaller companies, the likes of tech startups and creative businesses, its appeal to commercial buyers continues to intensify. While sales here are no match for those closed on Lexington or Third Avenues, investors are eager to bet on the Brooklyn commercial market, and assets are changing hands at an accelerated pace. There are 13 Brooklyn streets that made our list, while Manhattan is present with 9 streets out of the 30 most expensive.

The priciest street in Brooklyn is Flatbush Avenue, at #4 on our list, where commercial assets are trading for a median sale price of $5.6 million. That makes Flatbush pricier than Fifth Avenue or Broadway in 2019. This busy street is developing fast, with Brooklyn Point, the tallest building in the borough, currently under construction here, as part of the larger City Point project. Investors are drawn to this area like a magnet, and the top deal of 2019 on Flatbush Avenue was the $100 million sale of the 270 Flatbush Avenue extension. The 1919-built, three-story office building changed hands in late June, and we’re betting that whoever purchased it is planning to build something bigger on that lot.

In Queens, 2019 proved a fruitful year for commercial transactions. A total of seven streets made our list of NYC’s 30 most expensive, adding up to a combined commercial sales volume of $863 million in 2019.

The priciest street in Queens during 2019 was Northern Boulevard, which boasts a median sale price of $4.6 million for commercial assets, landing it at #5 on our list of expensive streets. The biggest commercial deal to close here this year was the $40 million sale of a retail building at 51-30 Northern Boulevard. The building had been occupied by Sports Authority for 20 years, until the sporting goods brand filed for bankruptcy and shut down the store. The retail building will soon be replaced by a 1,000 high-school, a project approved by the New York City Council and led by the School Construction Authority (SCA).

Staten Island and The Bronx aren’t exactly popular when it comes to commercial real estate transactions, especially when compared to the other three boroughs. However, The Bronx managed to sneak in one street in our list of 30 priciest streets in NYC.

When it Comes to Commercial Sales, FiDi is the Priciest Neighborhood in NYC

Zooming out to neighborhood level, Manhattan once again tops the list, but this time it manages to really steal the show, snagging the entire top 10. What’s more, 19 of the 30 neighborhoods on our list are located in Manhattan, with Brooklyn, Queens and The Bronx sneaking in a couple of entries of their own.

The Financial District is the priciest commercial neighborhood in NYC by far, with a median sale price of $43.8 million, based on 10 sales closed in 2019. This year, FiDi recorded $794 million in commercial sales volume, the biggest deal having been MetroLoft’s $270 million purchase of AIG’s 175 Water Street. Spearheaded by Nathan Berman, MetroLoft plans to convert part of the office building into residential once AIG moves out of the building in 2021.

The second-largest FiDi commercial sale closed in October, when Jacob Chetrit forked over $181.5 million to buy the office building at 1 Whitehall Street from Rudin Management, with help from Cushman & Wakefield. According to the New York Post, the building was sold to settle estate taxes for the late Jack Rudin, who passed away in 2016.

The Fashion District, or Garment District, as most of us call it, occupied the second spot on our list of priciest commercial neighborhoods in the city. Its median sale price of $12.4 million was boosted by the $850 million sale of the Lord & Taylor’s Department Store at 424 Fifth Avenue. Coworking giant WeWork partnered with private equity firm Rhone to close the sale in the year’s second quarter, and plans to take over the entire 676,000-square-foot building.

The Central Midtown area managed to grab the third spot on our list of pricey commercial neighborhoods in NYC, due in large part to the double sale of the Coca-Cola Building at 711 Fifth Avenue. The 354,000-square-foot office building sold to Nightingale Partners and Wafra in August, for $909 million. Just one month later, a partnership between SHVO and Bilgili Group bought a majority stake in the building, for a reported $937 million. Interestingly enough, SHVO and partners had placed a $955 million bid to acquire the property in the summer, yet the building ultimately went to Nightingale and Wafra. The double sale of Coca-Cola’s headquarters is undoubtedly one of the largest flips of a New York City property, as we rarely get to see a trophy office asset changing hands twice in the same quarter.

The Bronx, Home to the Priciest NYC Commercial Neighborhood Outside Manhattan

In an unusual twist, The Bronx landed one of its neighborhoods at #12 on our list, namely Mount Hope/Mount Eden, which is the priciest NYC neighborhood outside Manhattan when it comes to commercial deals in 2019. The neighborhood saw 11 deals close this year for a combined volume of $59 million and a median sale price of $5.8 million. Out of these 11 sales, the largest was that of a 58-unit multifamily building at 1466 Grand Concourse, which traded hands in April for $13.8 million.

Three other neighborhoods in the Bronx made our list, namely Mott Haven/Port Morris at #18, Highbridge/Morris Heights at #26 and Kingsbridge Heights/University Heights at #29.

Only one Queens neighborhood made our list, namely Bayside, which landed the 19th spot, with a median sale price of $3.75 million in 2019. A total of 12 commercial transactions closed here this year, for a combined volume of $45 million.

The biggest commercial transaction to close in Bayside this year took place in May, when the Bayside Tennis Corporation sold the Bayside Tennis and Racquets Club at 34-28 214th Place to 6118 Bayside LLC, for $12.2 million. The Bayside Historical Society, along with other community members, rallied to prevent the sale from going through, as developers suggested they would raze the historic club grounds. Even so, the sale eventually finalized, and there’s no news yet about the future of the Queens athletic club.

6 Brooklyn Neighborhoods Make the Cut, Though None in the Top 20

While Brooklyn was heavily present on our list of 30 most expensive NYC streets, zooming out at neighborhood level takes some of the spotlight away from the borough. A total of six neighborhoods made our list, though none of them landed any of the top 20 slots.

The priciest Brooklyn neighborhood when it comes to commercial transactions is Carroll Gardens at #22, where 17 deals closed for a combined $83 million and a median sale price of $3.7 million. The largest commercial transaction in the neighborhood closed in February, when New Dawn Charter Schools paid $14 million to purchase the property at 238 Hoyt Street from Ulbern Realty LLC. In 2016, New Dawn sought $16.5 million in tax-exempt bonds to buy, develop and renovate the 24,000-square-foot building at 238-242 Hoyt Street. The project would bring the high school facility to 36,000 square feet, with a total project cost of $19 million.

Following close at #23 on our list is Gowanus, which saw 20 commercial deals close in 2019, for a combined volume of $177 million and a median sale price of $3.4 million. The biggest deal in the neighborhood was Avery Hall Investments’ $44 million purchase of a prime development site at 469 President Street, 473 President Street and 514 Union Street from EcoRise Development. The site allows for 98,000 square feet of commercial development, in an area that is seeing intense investor interest due to a rezoning plan that will allow mixed-use projects to be built along the Gowanus Canal. JLL, which sealed the deal, suggested that the Royal Palms Shuffleboard Court will probably stay put at 514 Union Street long-term.

We looked at all commercial real estate transactions to close in New York City from January through October 2019, based on sales data from the DOF. We imputed a minimum sale price of $1,000, and excluded all deals with undisclosed sale prices.

Median sale prices and sales volumes were calculated only for the streets and neighborhoods that recorded 10 or more sales during the selected timeframe.

Neighborhood boundaries are those defined by the NYC Department of Finance.