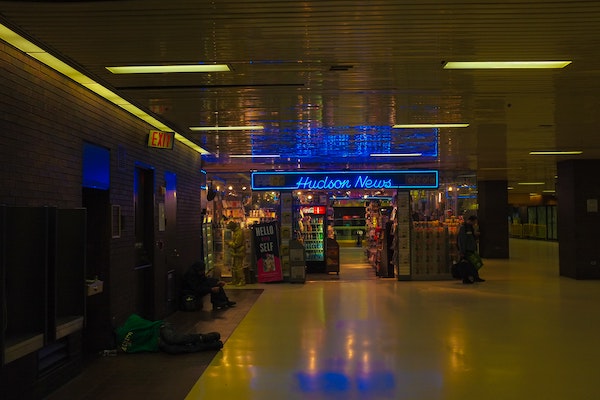 There was never any glory in the race for ‘NYCs Most Dismal Point of Entry.’ But since Penn Station’s 255,000-square-foot Moynihan Train Hall expansion opened on New Year’s Day, the Port Authority Bus Terminal doesn’t even have a worthy rival for the title in Midtown Manhattan.

The low and leaky ceilings, hellish restrooms, busted windows, and the confusing and lackluster configuration of the PABT are now synonymous with Midtown’s overburdened infrastructure. All of these issues left a permanent stain on the Port Authority’s reputation.

However, the terminal’s upcoming redevelopment promises to finally get rid of a notorious worm in the Big Apple. It’s set to breathe new life into Midtown Manhattan and give its 21st-century business era the strong backbone it desperately needs.

The brief history of the PABT

The infamous station has spent the better part of its history as a butt for ridicule. The short-sighted and hampered initial planning meant its facilities were overladen from day one. So, it started to garner an appalling reputation quite early.

There have been numerous efforts to transform it into the functional and safe mass-transit hub people needed it to be. But for the most part, these efforts turned out to add insult to injury.

Born out of desperation

The growing interstate bus transit had put a strain on Midtown traffic by 1939, with coaches bouncing back and forth between eight different terminals.

The committee entrusted to find a solution to the mounting congestion problem failed to develop a plan that the independent bus stations would accept. Hence, Mayor Fiorello LaGuardia pitched the idea of a large central terminal to the Port Authority of New York and New Jersey. Legislation enacted by his successor in 1946 enabled the PA to take action. $24 million later, the first bus rolled into the PABT at 41st Street and 8th Avenue on December 15, 1950.

The first expansion—you’ve guessed it: out of desperation

Built with an Art Deco influence, the original PABT looked entirely different from its current version. However, it already had something in common: it didn’t serve its purpose very well.

It’s hard to get a grasp on just how far the reality fell from LaGuardia’s vision of a futureproof mass transit facility, second to none in volume and efficiency. In less than a decade, the PA decided to repurpose the rooftop parking for bus operation and add three floors to accommodate 1,000 parking spaces.

The overhaul was finished by 1963 without interrupting daily service during construction. By 1966, however, the terminal was considered overloaded again. The slapdash nature of the renovation only added to the flaws of the original design, and the PABT resembled an obscure maze. Throw in nearly 70 million passengers every year, the economic downturn of the ’70s, and you have a hotbed for crime.

The history of the building is not an uninterrupted series of disasters. In 1970, the PA made a clever move to improve the efficiency of the PABT. It was so brilliant that they still use it to this day. The two-mile exclusive bus lane on the New Jersey approach cuts 15-20 minutes out of each trip to the terminal.

In 1981, the building suffered another revamp. And indeed, it suffered, because this time, it was a death blow to whatever charm it had left.

The addition of the North Wing at 42nd Street meant 52 new bus-loading platforms. And 200 extra parking spaces to an overall 50% capacity boost. However, the already botched facade received 27 unforgivable diagonal steel girders. That earned it a place among the world’s ugliest buildings.

Paradoxically, while the building struggled with capacity, the headway of air travel in the ’80 rendered much of the terminal’s parking component underused. Underused by cars, because the outcasts of society quickly filled the space.

Over its 70 years of existence, the PABT gathered an expansive collection of nicknames. Former New York Governor Andrew Cuomo deemed it an eyesore. Last Week Tonight’s John Oliver even called it the single worst place on Planet Earth. Even its early devotees quickly recanted their initial praises. The same New York Times that, upon the PABT’s inauguration dubbed it “revolutionary” and “functionally perfect” later declared there are two types of people inside: “Some are waiting for buses. Others are waiting for death.”

The PABT today—ripe for a fresh start

When it first opened in late 1950, the Port Authority Bus Terminal could handle 60,000 passengers a day. Before the current pandemic, a quarter of a million passed through it on a regular weekday. One in four passengers were New Jersey commuters.

The terminal is pivotal to Midtown Manhattan‘s future. The exodus of high-profile office tenants to more modern districts, such as Hudson Yards, has already begun. Consequently, this constant stream of the commuting workforce is critical to the entire borough.

The terminal will finally get its long-overdue redevelopment by 2030, as part of a $51 billion master plan to rebuild Midtown West. The plan has been in the works for more than seven years and could take a decade to complete.

An earlier proposal that suggested relocating the terminal had caused some commotion among community leaders. Still, the revised plan calls for rebuilding and enlarging the existing hub while keeping it open for travelers.

The new terminal would have the capacity to handle 1,000 buses during the evening rush hour. That would be a significant improvement from the 850 buses it accommodates today.