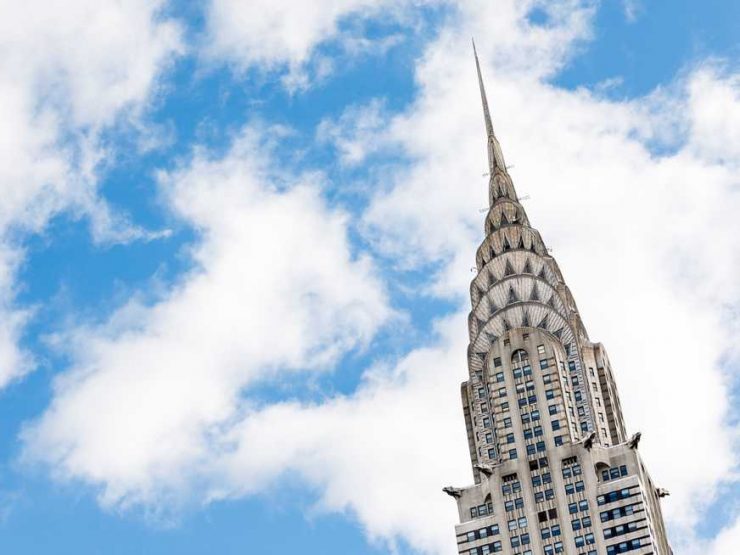 Last month, the iconic Chrysler Building, once the tallest skyscraper in the world and a staple on the New York City skyline, changed owners. Considering that the last time the building was sold it fetched $800 million—this was during the financial crisis of 2008—you’d think it would sell for an even higher price in 2019. That wasn’t the case: Austrian developer Signa Holding, alongside New York-based RFR Holding, snagged the 77-story tower for just $150 million. Here’s the backstory.

The Art Deco-style building at 405 Lexington Ave. was completed in 1931, and held the title of the world’s tallest building for less than a year, before it was surpassed by the Empire State Building. It was developed by Walter Chrysler, head of the Chrysler Corp., and designed by William Van Alen. The tower housed the company’s headquarters for more than two decades, after which it changed hands several times. In 2008, the Abu Dhabi Investment Council purchased a 90% stake in the property for a whopping $800 million, while Tishman Speyer held the remaining 10%. More than a decade later, the Chrysler Building was put up for sale, and found its new owners very quickly.

But why the small sale price?

The main reason why the Chrysler Building sold for just $150 million is that the land that the building sits on is not part of the deal. The Cooper Union school owns the ground beneath the tower and leases it to the owners of the building—and the rent is not cheap. According to Architectural Digest, Cooper Union raised the annual rent from $7.8 million in 2018 to $32.5 million in 2019, with plans to further raise that amount to $41 million by 2028. So, owning the Chrysler Building, as glamorous as it might sound, comes at a very steep cost. What’s more, the building is currently 80% vacant, which is another cause for concern given its super-desirable location in the heart of Manhattan.

Another reason why investors weren’t willing to pay big bucks for the Chrysler Building is its age and amenities, an issue that Edward Minskoff also tackled talking to the Commercial Observer. While the tower has been upgraded over the years, it still lacks the desirable features that companies look for nowadays: floor-to-ceiling windows, large, contiguous open spaces that leave room for expansions, and other modern-day amenities that might not be found in 88-year-old buildings.

It’s understandable that, following this sale, some would fear that the Manhattan office market might be going through a rough patch. However, according to a recent feature by The New York Post, that might not be the case. The Chrysler deal is an exception to the rule, as the low sale price was influenced by the factors we mentioned before; other properties are selling like hot cakes on the market. The Coca Cola-owned building at 711 Fifth Avenue is expected to sell for $900 million, while the sale-leaseback of 30 Hudson Yards could close for more than $2 billion, according to the Post. The small price tag for the Chrysler Building might just bring forward the harsh realities of what it means to own a building in Manhattan, but not the land underneath it.

If your business or organization wants a convenient location in Midtown Manhattan, an iconic building with a high level of amenities, reach out to us and we will show you worthwhile space situated in the most central location of New York City.

To learn about available office space at The Chrysler Building call Metro Manhattan Office Space at (212) 444-2241.