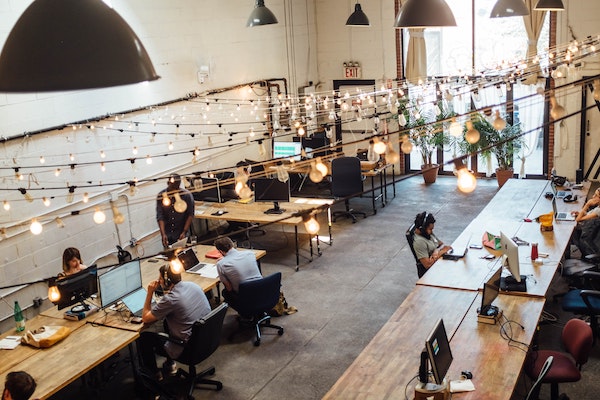 New York City’s tech boom began in the 90s when the Flatiron District became known as “Silicon Alley” – the East Coast equivalent of Silicon Valley. Startups and technology companies began opening new offices across New York City, including Google, Facebook, Amazon, Apple, and Tesla, all of whom have a sizable footprint in Manhattan today.

While a hybrid model of remote work and in-office collaboration is becoming the norm, a physical office has remained as critical as it has always been for young startups.

Technology companies value office environments that encourage team collaboration, favoring high ceilings and the ability to expand their footprint quickly when needed, to match the brand’s growth. Simplified commuting options and a strong sense of security are also valuable, given that employees often put in long hours.

Real estate market conditions have not been this favorable for startups since the high vacancy rates and low rents following the 2009 Financial Crisis. Prior to March 2020, many young companies planned to acquire new commercial office space in Manhattan but were discouraged by low availability and high costs.

Founders of startups are often drawn to trendy and culturally significant parts of Manhattan, which helps attract and retain forward-thinking employees that can take their brand to the next level. Below you’ll find the best neighborhoods in Manhattan for startups and entrepreneurs, and why they’re a perfect fit for companies in the technology sector.

Today, we will take a look at parts of Manhattan which appeal to technology startups. While Hudson Yards, FiDi, the Plaza District, or Grand Central appeal to traditional companies in legal or financial services, as well as large corporations looking for multiple-floor spaces, they’re not necessarily what entrepreneurs are looking for. Below you’ll find a list of the most trendy, vibrant and appealing Manhattan neighborhoods for technology startups:

Seasoned entrepreneurs will remember the glory days of NYC’s tech scene when the Flatiron District was the city’s tech epicenter. The birthplace of Silicon Alley, this district is once again one of the most desirable neighborhoods in Manhattan for startups and entrepreneurs. Demand for creative office space in the area is higher than ever, especially for early-stage businesses and entrepreneurs. The Flatiron District’s boutique office buildings are an ideal fit for companies looking to lease loft-style space in the heart of Manhattan.

Flatiron offers the best of both worlds for companies just starting out: small, creative spaces with a loft-like feel and the modern amenities of a Midtown office building. Not to mention the endless list of restaurants, clubs and bars, coffee shops, shops, and public transport options available at every step. Madison Square Park and Union Square Park are both easily accessible and are popular lunch break options for techies in the neighborhood. On-site lunch options include Shake Shack and Eataly, while fitness buffs can head to Equinox during breaks to work out.

Where to find startup office space in the Flatiron District

Entrepreneurs choosing to set up their business in the Flatiron District will be in good company. Peloton, Moat, Mashable, DropBox, Sony, Justworks, Yext – these are just some of the companies operating in the neighborhood. There are plenty of coworking options available for solopreneurs looking for a temporary office, including spaces managed by WeWork, Coalition, and Rise New York. A Flatiron office will also unlock various networking opportunities for new entrepreneurs. For instance, the Flatiron School offers coding classes and hosts regular networking events at their 11 Broadway campus.

For startups looking for a more permanent location, there are numerous options worth checking out. The Market Center at 230 Fifth Avenue is a Beaux-Arts building with stunning Manhattan and the Empire Building views. The Class B property at 11 West 19th Street has been recently renovated to meet the needs of modern creative tenants. Other solid picks include 115 Fifth Avenue, 902 Broadway, 928 Broadway, and 200 Fifth Avenue. Last but not least, the Flatiron Building will offer Class A office space for rent once renovations are complete. The Flatiron District has something for everyone, offering spaces ranging from 2,300-square-foot small offices to full-floor lofts of more than 5,000 square feet.

Chelsea has gradually transformed from a former manufacturing hub into one of the most popular markets for technology companies and startups. It’s a perfect destination for creative individuals, being home to more than 200 art galleries and riddled with restaurants, shops, and museums. Its unrivaled location is close to Madison Square Garden, the Whitney Museum, Hudson Yards, the Vessel, Penn Station, and the High Line, which makes it a great fit for young entrepreneurs who value walkability and access to alternative transportation options.

Chelsea is the perfect choice for technology startups looking to rent open-floor, flexible office space with an industrial feel. Its former manufacturing warehouses and buildings have been converted to modern and creative office space. Perhaps Chelsea’s most well-known tech resident is Google, which owns the sprawling 2.9 million-square-foot building at 111 Eighth Avenue, the Chelsea Market building right across the street, and the Milk Building at 450 West 15th Street. Google’s constant expansion in Chelsea has attracted other tech companies to the area, including Knotel, Verizon, Apple, Playbuzz, Sidewalk Labs, Nielsen, Samsung, and Venmo, among many others.

Where to find startup office space in Chelsea

Companies looking to expand and take over full-floor or multiple-floor office space in Chelsea have various options at their disposal. The Starrett-Lehigh Building at 601 West 26th Street is one of the largest office properties in the city, featuring 2.3 million square feet of office space. It incorporates flexible floor plates ranging in size from 18,000 to 165,000 square feet, catering to creative tenants of all sizes. Other options include 675-691 Sixth Avenue, 210 11th Avenue, 620 Avenue of the Americas, 275 Seventh Avenue, and 352 Seventh Avenue.

Given the influx of companies moving into Chelsea and Hudson Yards, asking rents have been steadily rising over the past years. The advantage is that the neighborhood offers something for everyone, whether a small 400-square-foot office for $1,500 per month or a larger office of 10,000 square feet at $45,000 per month. There are also coworking opportunities in the area, provided by WeWork, AlleyNYC, or Wix Lounge. Today, landlords are open to negotiations, and potential tenants could even negotiate rent reductions, free rent, or shorter lease terms, so it’s a good time to make a move into this market.

Soho is the ultimate destination for creative entrepreneurs or small startups in the early stages of growth. Its casual, creative, loft-style office spaces have a lot of history and personality, which is precisely what technology businesses value. The neighborhood’s former manufacturing buildings have been converted to modern office space while at the same time preserving the historical touch of Soho’s Cast Iron District. Large windows, high ceilings, exposed brick and concrete, abundant natural light – these are some of the amenities office tenants can find in this submarket. Tenants in this neighborhood also enjoy easy access to public transportation, numerous restaurants, shops, bars, coffee shops, a rich nightlife, and a vibrant culture and art scene.

Soho is located in the heart of Midtown South, served by multiple subway and bus lines that connect workers to all parts of Manhattan, Brooklyn, and Queens. The neighborhood represents an appealing destination for fashion, art, media, architecture, and design companies due to its trendy vibe and reduced office rents. Compared to other office-intensive submarkets such as FiDi, Chelsea, Flatiron, or Hudson Yards, Soho offers significantly lower prices while offering many advantages. The neighborhood’s relaxed feel has attracted various tech-related companies, including Reddit, Foursquare, Contently, Warby Parker, and Apple.

Where to find startup office space in Soho

Demand for Soho office space for rent surged in the past years, and as a result, asking prices were on a steady rise before the pandemic. Good options can be found at 495 Broadway, 100 Crosby Street, 599 Broadway, 295 Lafayette Street, and 110 Greene Street, to name just a few.  These buildings maintain an authentic feel that harks back to the golden era of Soho’s Cast Iron District. But they’ve been updated to cater to the needs of modern creative tenants. Recently renovated options include the Class A building at 770 Broadway, 524 Broadway, and The Prince Building at 568-578 Broadway.

Are you a startup thinking of setting up your business in a convenient location in Manhattan? Are you looking to lease office space in a trendy loft building in a vibrant neighborhood? To learn about available office or retail space, call Metro Manhattan Office Space at (212) 444-2241 or email us at [email protected].