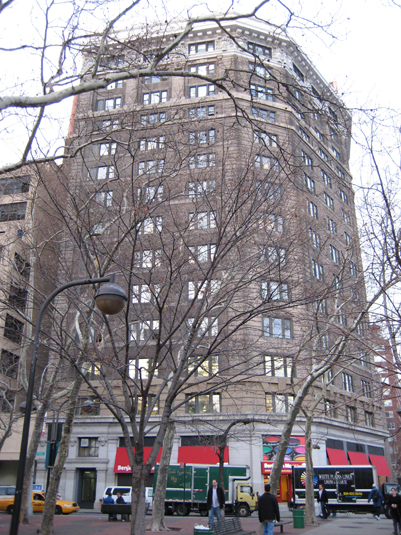 Two historic loft buildings at the border between SoHo and Hudson Square in Midtown South have been reimagined as a two-building office and retail complex fit for creative businesses. Built in 1927, 233 Spring Street used to house printing companies, while the building at 161 Avenue of the Americas was built in 1904 to house the Butterick Publishing Co., which published fashion-related magazines.

In 2017, the two buildings were completely redeveloped with the help of Gensler, and joined by an elongated common core and two-story lobby. The redevelopment effort, spearheaded by building owner Stellar Management, is dubbed One SoHo Square, and the two buildings are now known as One SoHo Square East and One SoHo Square West. The complex is currently home to various high-profile tenants in industries like healthcare and fashion, and boasts a plethora of state-of-the-art amenities.

Getting to and from One SoHo Square

One SoHo Square benefits from an excellent location in Midtown South, in an area popular with creative office-using tenants, art galleries, luxury shops and restaurants. The office complex is located directly above the C and E trains, and just 3 blocks away from the 1 train. Penn Station, the Port Authority, Grand Central Station, World Trade Center and the Fulton Transportation Hub are all less than 10 minutes away by train.

Who is renting office space at One SoHo Square?

One SoHo Square is conveniently located in an up-and-coming area of SoHo and Hudson Square, popular among businesses in creative industries like tech, media, fashion, art, and architecture and design. Current office-using tenants at One SoHo Square include Aetna, Flatiron Health, Aveda Institute, Glossier, MAC Cosmetics, and the previous owner of 161 Avenue of the Americas, Earle W. Kazis Associates. Retail tenants include CVS Pharmacy and Trader Joe’s.

How much is the rent price for office space at One SoHo Square?

Office asking rents at One SoHo Square tend to be roughly on par with, or above, the average found in Midtown South, which reached $84 per square foot in 2019, per CBRE. Office rents in SoHo often command roughly $92 per square foot, as the submarket is becoming increasingly popular with creative companies in tech, advertising, media, fashion and design.