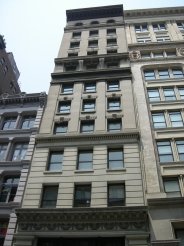 The office building at 625 Broadway in the heart of Midtown South’s NoHo neighborhood was built in 1896. It was completely renovated in 2013, when building owners brought it to modern standards and added a myriad of top-notch amenities to attract office tenants. The building is located between Houston Street and Bleecker Street, offering tenants easy access to public transportation, as well as dining, shopping and leisure destinations.

Getting to and from 625 Broadway

625 Broadway benefits from a great location in the heart of Midtown South, offering tenants easy access to all the shopping and dining options of NoHo and SoHo. The building is also convenient to many public transportation options, including bus service and B, D, F, M, N, R, 4 and 6 train service.

Who is renting office space at 625 Broadway?

How much is the rent price for office space at 625 Broadway?

Office asking rents at 625 Broadway tend to be on par with, or slightly more affordable than the average commanded in Midtown South. Here, the average asking rent for office space surpassed $80 per square foot in 2019. However, prices for Class B offerings are less expensive than Class A spaces, yet they are a great fit for growing businesses, as they offer all the modern amenities that office-using companies look for today.