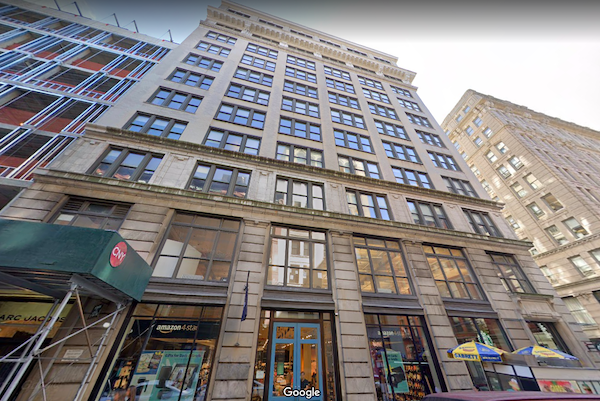 The brick and terra cotta office building at 72 Spring Street in Midtown South was completed in 1908 for John E. Olsen. It was designed by Charles I. Berg in the Renaissance Revival architectural style. The property has an alternate address of 65-73 Crosby Street and has housed numerous tenants over the years, including Fair Waist & Dress Co., Petit Frocks, Magnum Photos, and Langsdorf. It was once known as the Langsdorf Building. The property is part of the SoHo-Cast Iron Historic District, and nowadays offers Class B, loft-style office space and ground-floor retail.

The former Langsdorf Building at 72 Spring Street offers roughly 110,000 square feet of Class B Soho/Noho office space, as well as ground-floor retail space. The historic Soho building was completed in 1907-1908 and was completely renovated in 2013. The property was originally industrial, housing various garment manufacturers over the years until it was converted to loft-style office space. Nowadays, 72 Spring Street is owned and managed by Heller Properties and includes a 6,000-square-foot showroom occupied by fashion brand Marc Jacobs.

Getting to and from 72 Spring Street

The Langsdorf Building benefits from an excellent location in the heart of Midtown South, in the historic Soho Cast Iron District. Those working within the building have easy access to a plethora of shopping, dining, and leisure destinations in the neighborhood. Public transport is also easily accessible via the Spring Street and Prince Street stations, which serve the 6, N, R, and W lines.

Who is renting office space at 72 Spring Street?

72 Spring Street is home to various small and midsized tenants in industries like fashion and education. Notable tenants occupying office space in the former Langsdorf Building include Marc Jacobs, The Goethe Institute, and Chobani. Retail tenants include Starbucks and an Amazon bookstore.

How much is the rent price for office space at 72 Spring Street?

Office asking rents at 72 Spring Street hover between $60 and $80 per square foot, depending on the terms and size of the lease. The building’s excellent location and modern amenities make it a highly appealing choice for tenants in creative industries like fashion, design and architecture, media, and communications.