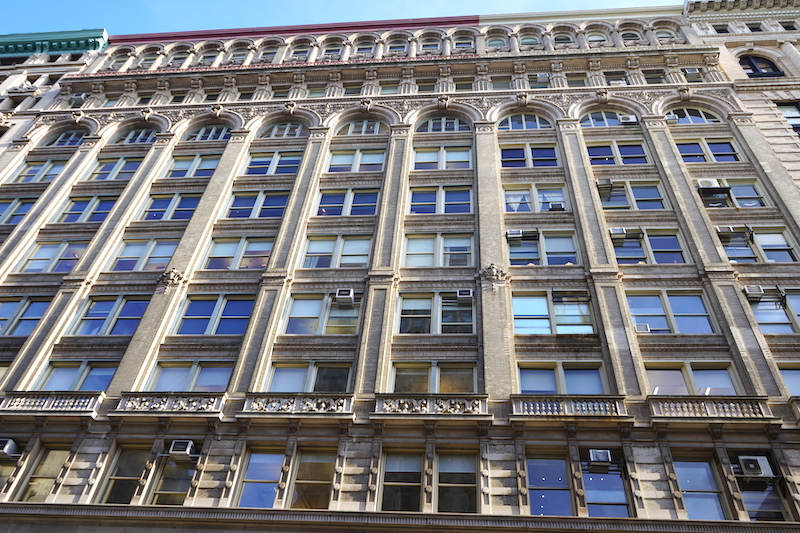 The office building at 584-590 Broadway in Midtown South was originally built in 1897. It was designed by Buchman & Deisler and boasts an alternate address of 116-122 Crosby Street. The Class B SoHo office space was renovated during the 1990s, and is currently owned by Olmstead Properties. 584-590 Broadway is home to various companies working in advertising and media, architecture, design, and healthcare, and offers spacious floor plates and top-notch amenities.

Amenities include above-standard ceiling height, on-site management by Olmstead, concierge and 24/7 access via key card. The building’s two lobbies have been renovated in the late 1990s, and now feature high-speed, upgraded elevators, as well as renovated common areas and restrooms.

The office building at 584-590 Broadway benefits from an excellent location in Manhattan’s SoHo district. Besides offering easy access to a plethora of dining and shopping destinations on Broadway, the building is also convenient to the B, D, F, M, N, R, Q, 4, 5, and 6 subway lines, as well as to several bus lines.

The SoHo office building at 584-590 Broadway is home to a mixed tenant roster, including companies working in fields like architecture and design, publishing, advertising, and healthcare. Notable tenants within the building include the Elton John AIDS Foundation, Pace Development Group, STUDIOS Architecture, New Tradition Media, as well as shared office space provider Knotel.

The ground floor of the building is home to a store operated by The North Face and the Broadway Gourmet restaurant.

How much is the rent price for office space at 584-590 Broadway?